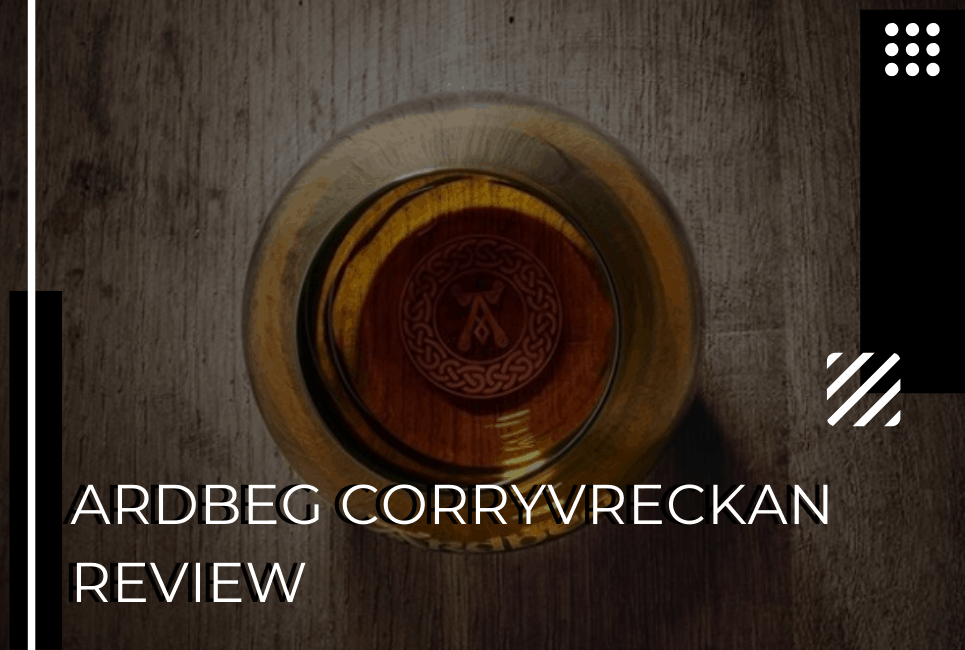 Ardbeg describes Corryvreckan as the peatiest, smokiest, most complex of all Islay whiskies. It’s not for the faint of heart, and it’s raw magnetic power mirrors the whirlpool it’s named after. The Corryvreckan whirlpool is one of the most dangerous stretches of water in the British Isles and can be heard from ten miles away.

While this whisky is well-known among enthusiasts, there are some who despise it. However, it’s worth a try for whisky and wine lovers alike. You’ll find out why soon enough. 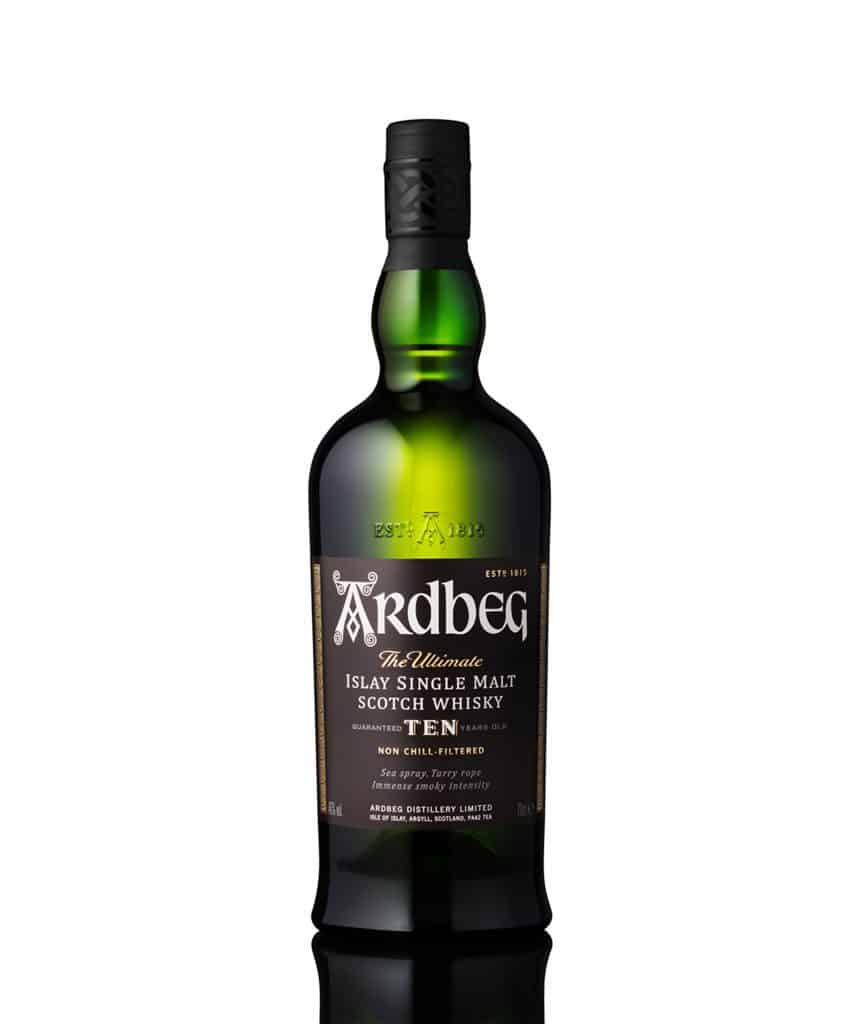 Ardbeg was founded in 1815 by John Macdougall on the remote Scottish isle of Islay. It’s a traditional whisky distillery nestled in the heart of Scotland and it’s whisky is as rich as its history. From first taking out a license more than 200 years ago to the current operations of today, Ardbeg has suffered many ups and downs, including closings, limited periods of distillation, and very small batches intended mostly for blends.

The first major change in the Ardbeg story happened in 1838 when a spirit merchant from Glasgow bought the distillery. While John Macdougall’s son Alexander stayed behind to manage operations, the distillery was now under new ownership.

When Alexander Macdougall died in 1853, his sisters Margaret and Flora became Scotland’s first female distillers. They achieved an impressive milestone in 1887 when they surpassed more than 1.1 million liters of distilled whisky per year.

Good fortune continued through 1911 when the name Ardbeg became a registered trademark. The image of the letter A to begin Ardbeg’s name is also registered at this time to protect the brand and the reputation it had built. In 1922, the Ardbeg distillery returns to its almost original owners via a purchase by the Alexander Macdougall & Co LTD entity. Then in 1977, Ardbeg is acquired by Hiram Walker, one of the most prominent whisky manufacturers in the world.

Unfortunately, several years later, in 1981, production slows and then stops completely. The distillery closed, 18 people lost their jobs, and it had a dramatic effect on the entire local community and its economy.

In 1987, when Allied Lyons acquired Hiram Walker, they also acquired Ardbeg along with it. This purchase was meant to simply reopen the distillery to satisfy the demand for Ardbeg in blends. It was not being produced for consumption on its own at this point. It was simply being distributed to other distilleries that used it for blending.

In 1991, the distillery closed again. There was not enough demand to justify its operation. It remained closed until 1997 when The Glenmorangie Company bought the distillery itself. Production resumed with some of the first bottles containing 17-year-old whisky.

From here, it’s relatively smooth sailing for Ardbeg as they continue to build production back up to where it was before. By 1999, they had increased production to 600,000 liters per year and had won Distillery of the Year once. Since then, they’ve won more awards, released more whiskies, and launched experiments related to their name. They’re now celebrating more than 200 years and going strong. 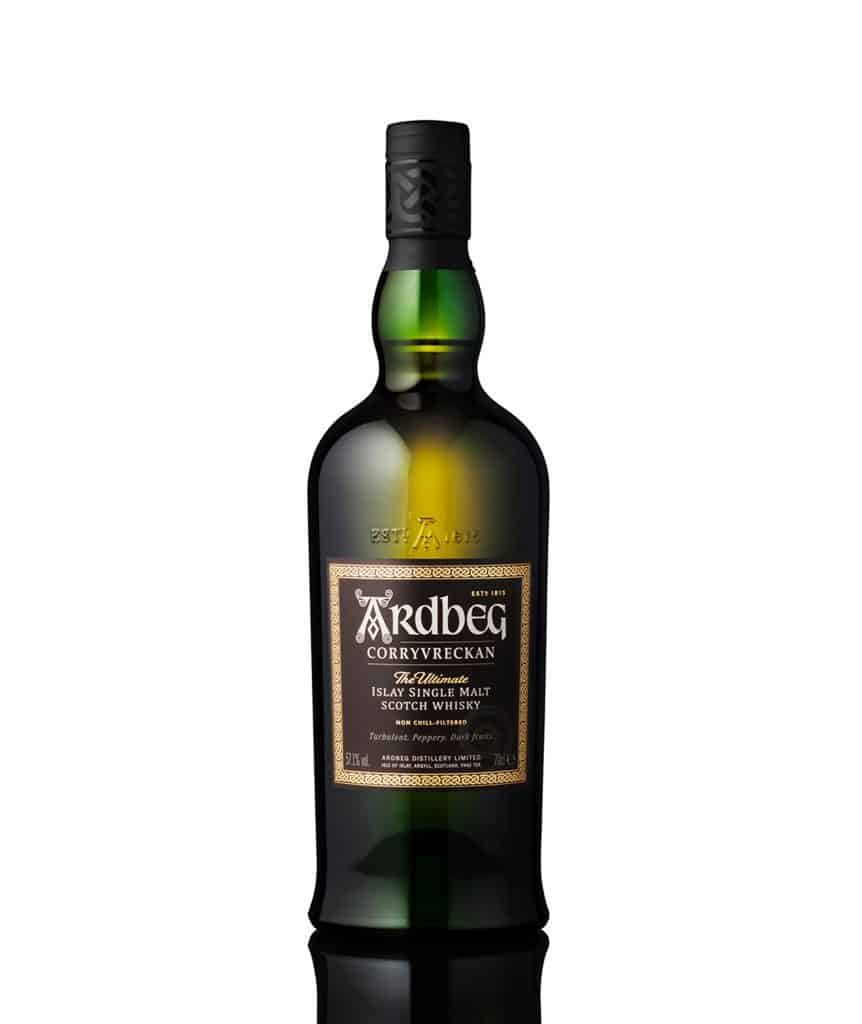 In 2000, the Ardbeg Committee formed to ensure that the Ardbeg Distillery never closed again. With the formation of the committee came the development of the Corryvreckan whisky. It was an exclusive release by the committee and the earliest, tan-labeled bottles are the most valuable today.

There are many Ardbeg enthusiasts today who aren’t happy with the Corryvrecken for replacing the Airigh Nam Beist they loved so much, but that’s generally the way it goes with small distilleries. Your favorite labels won’t last long and there’s always something new coming down the pipe, so enjoy it while you can and learn to roll with the punches.

What’s in a bottle?

Current releases are kept largely a secret. The Corryvreckan whisky is no exception. When you pick up one of the dark green glass bottles, you’ll find dramatic and poetic words of choice, but they don’t really tell you anything.

You’ll find in reading the details that Corryvreckan is named for a whirlpool just north of the isle of Jura, which neighbors Islay. The packaging is mostly comprised of legend, but nothing concrete or rooted in how the whisky is made.

It’s a lovely way to peak your interest and spark adventure without giving away too much about the actual whisky inside. There’s no mention of age or cask selection. However, you will find information confirming that your Corryvreckan is a single malt Scotch whisky from the isle of Islay, bottled at just above 57% alcohol by volume.

Most other offerings in Ardbeg’s Ultimate Range collection feature age statements at the very least, and even cask selection details with information on non-chill filtering. You won’t find this with the mysterious Corryvreckan, and that’s just the way Ardbeg likes it.

And for those of you who do care about the packaging, there’s really nothing special here. The box is made of thin cardboard, the artwork on the front is simple, and it’s a very practical setup without a lot of waste. 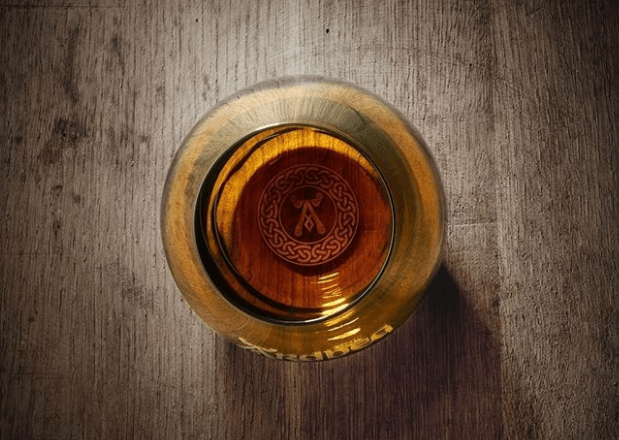 Corryvreckan is bottled at 57.1% ABV, making it 114.2 proof. There’s no age statement, but it is 100% malted barley. You can usually find it at about $70 to $90 per 750ml bottle. Its appearance is roughly the color of orange tea and it has extremely silky legs, which is indicative of its alcohol content and smooth taste.

Here are the quick stats before we dive in:

You could compare the orange tea look of Corryvrecken to that of golden honey. It’s a beautiful color that really adds to the nose and the palate of silky, buttery flavor.

Corryvreckan could be compared to a Chardonnay if that helps all you wine-lovers out there take the leap. It’s buttery and smoky. The nose opens up nicely once poured and you’ll notice substantial salt.

Also on the nose, you’ll find oven-dried seaweed, mint leaves, sweet vanilla cream, peat, leather, lemon bars, and brine. Some even say they can smell a hint of Red Vines in the Corryvreckan.

Corryvreckan is sweet to start, but the smoke and salt take over quickly, making it flow more elegantly across your tongue. The mouthfeel is silky and smooth with hints of salt and pepper, lemon cake, soy sauce, and a bit of bacon.

Despite the light mouthfeel, it feels a lot like Chardonnay once again. It’ll definitely kick you in the pants, but in a good way. As one review describes it: “Think of a piece of steak, dipped in coffee, then covered in dark chocolate, rolled in pepper, and finally spritzed with a lime or grapefruit mixture.”

There’s a fiery, brass finish that wakes you up and lingers for a while with hints of cinnamon sugar, smoke, and toffee. The finish will fill you with the warmth of an ashy campfire. It’s long and toasted, and once your glass is empty, you may catch a whiff of toasted almonds.

For those who haven’t tried many whiskies before, this may be a good place to start. It’s complex but smooth enough to tolerate, and the more you drink it, the more it grows on here. Here are a few other alternatives you could compare it to.

This single malt Scotch is another heavily peated option, with a PPM of only 45. However, the peat taste is very concentrated here. It’s a widely available bottle at roughly the same price point as the Corryvreckan. This Scotch has a 53.7% ABV and tastes of peat, iodine, tar, brine, and seaweed. The gentle vanilla flavor tames the beast with a nice sweetness. 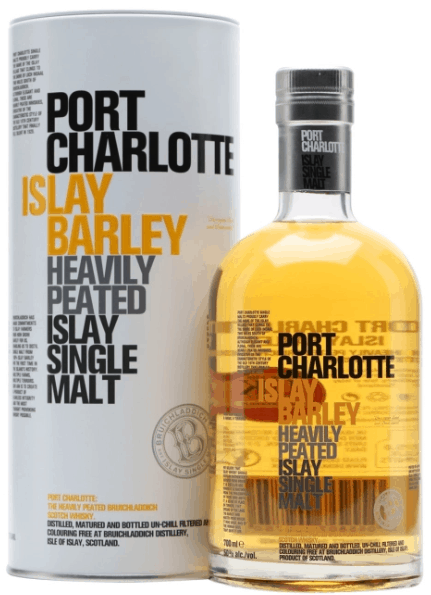 The Port Charlotte 2008 Islay Barley is unique because it’s made 100% with barley grown on the island. It’s a testament to local ingredients and local flavors. At 50% ABV, it’s not the highest, but it still packs a punch. Its robust character includes the taste of salami, chorizo, and roasted red pepper. It’s sweet and fresh with dry smoke to start and sugared almond to finish. It falls in the same price point as the Corryvreckan. 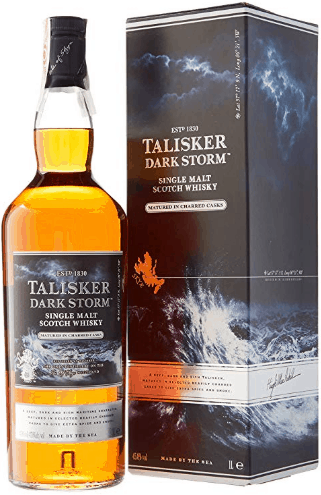 Venturing outside of Islay, you’ll find other peaty whiskies like the Talisker Dark Storm. It’s 45.8% ABV is still nothing to sneeze at, but what you’ll really notice is the smoky flavor that comes from maturing in deeply charred casks.

It’s rich, fruity, spicy, and citric. Full-on the palate with vanilla and licorice make it a classic choice for a lot of whisky lovers. Plus, it’s one of the most affordable on our list.

How long is Ardbeg Corryvreckan aged?

That’s a great question, and I hate to say I don’t know. But I don’t. Ardbeg keeps this information private, but the Corryvreckan can still stand up against those aged 10-12 years with no problem. Given the information they’ve released about other whiskies in the Ultimate Range collection, we can assume that the Corryvrecken has been aged for at least that long, but there’s no sure way to tell.

How do you pronounce Islay?

Ok, so this doesn’t really have anything to do with tasting the whisky, but if you’re going to taste it, you should know how to say it. The isle of Islay is off the coast of Scotland, in the British Isles. It’s pronounced EYE-la. Now you know.

You better believe it. Islay scotches are known for being some of the peatiest scotches in production. They have strong, smoky flavors and often are diluted with water. While each is unique, they all have this one thing in common.
You’ll notice similar flavors in all of them, including herbs, citrus, toffee, vanilla, and strong oak, which comes from the barrels where they are aged.

Can I pair my Ardbeg Corryvreckan with food?

Always. Most alcoholic beverages go well with food companions. The Corryvreckan’s flavor is enhanced by pairing it with meals like smoked meats, salmon, or grilled eggplant. You can also enjoy it with cheese like cheddar, gouda, or anything else aged and smoky.
For a real treat, compile a cracker tray with various cheeses and sliced meats like salami, and then sip your Corryvreckan along with it to see which you like best. And for dessert, try dark chocolate, caramel and sea salt, or flamed desserts.

Corryvreckan is a strong flavored single malt Scotch that is well worth a try. The more you drink it, the more you’ll love it. It’s a delicious choice from the Isle of Islay. If you’re new to whisky, it may or may not be a great place to start, depending upon what you’re used to drinking, but it is something to work up to.

It’s bright and punchy, and it’ll wake you up with every sip. If you love a rich history with your whisky, Ardbeg has the perfect story of success, turmoil, near extinction, and hope of rejuvenation.

The Macallan 12 Review: Should You Try This Scotch?

Dalwhinnie 15 Review – The Bridge Between Regions