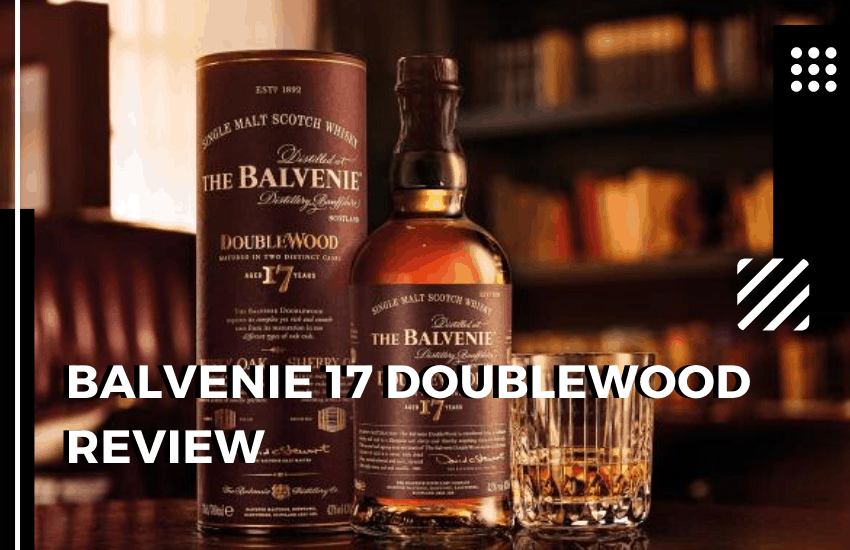 Balvenie Malt Master David Stewart presents the Balvenie 17 Doublewood, a 17-year-old whiskey with some surprising flavors that we wanted to look closely at. From the heart of Speyside comes a 43% whiskey with fruity aromas for those who appreciate the taste of a mild whiskey with a good story.

Released as an anniversary product, the Balvenie 17 Doublewood is a product created by perfecting another one, and it brings forth plenty of surprises for those who expected something cheaper-tasting.

How to Choose from Different Types of Whiskey

Welcome to the world of whiskey! You are now embarked on a journey that will bring your love for spirited drinks to a whole new level. For plenty of whiskey lovers, drinking is beyond a leisure activity: it’s a chance to delight the senses and experiment with tasting a variety of different flavors that are brought together by world-renown distilleries.

However, since you are at the beginning of your journey, knowing what type of whiskey to buy can be daunting. One type of whiskey can be completely different from the bottle right next to it, so you might be wondering how to tell the differences, and what do all those fancy whiskey-related terms actually mean?

The first thing that you should know is that whiskey is of many different types. It goes by different names, and those names will actually tell you where the whiskey in question is being made.

The most common whiskey that people have heard of is scotch. Scotch is made in one of the five main regions of Scotland: Highland, Lowland, Islay, Speyside, and Campbeltown. Naturally, each of these regions has a number of distilleries and is known for making different types of scotch.

Coming from Ireland, we have Irish whiskey. Its history is as old as that of scotch, and it’s known for light tones and fruity taste. Irish whiskeys are classified depending on how they were made. 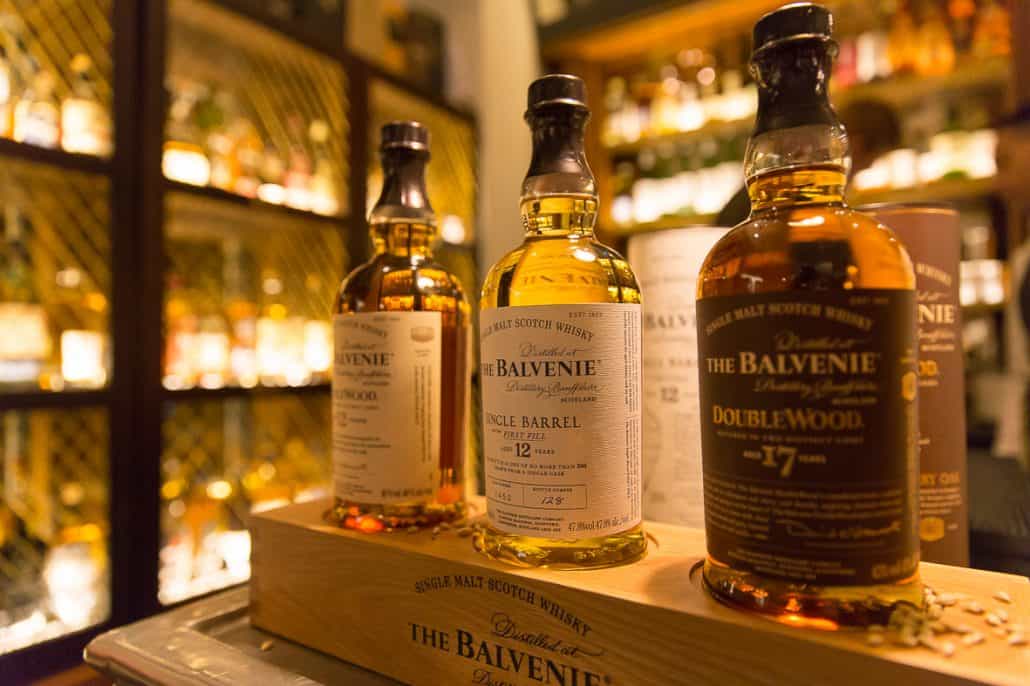 Whiskey made on American land is divided into six distinct categories: bourbon (which is made from 51 percent corn mash), Tennessee (similar to bourbon, but goes through charcoal filtering), wheat (it contains 51 percent wheat mash), rye (needs to contain rye mash and a maximum distillation of 80 percent), and American single malt (known for its smoky flavor).

The last category is made from Japanese whiskeys. Their flavors are strikingly similar to those coming from Speyside and Lowland, but there is also a noticeable taste of honey that makes them sweeter. Japan has grown quite a lot among the rank of the world’s best whiskey producers. 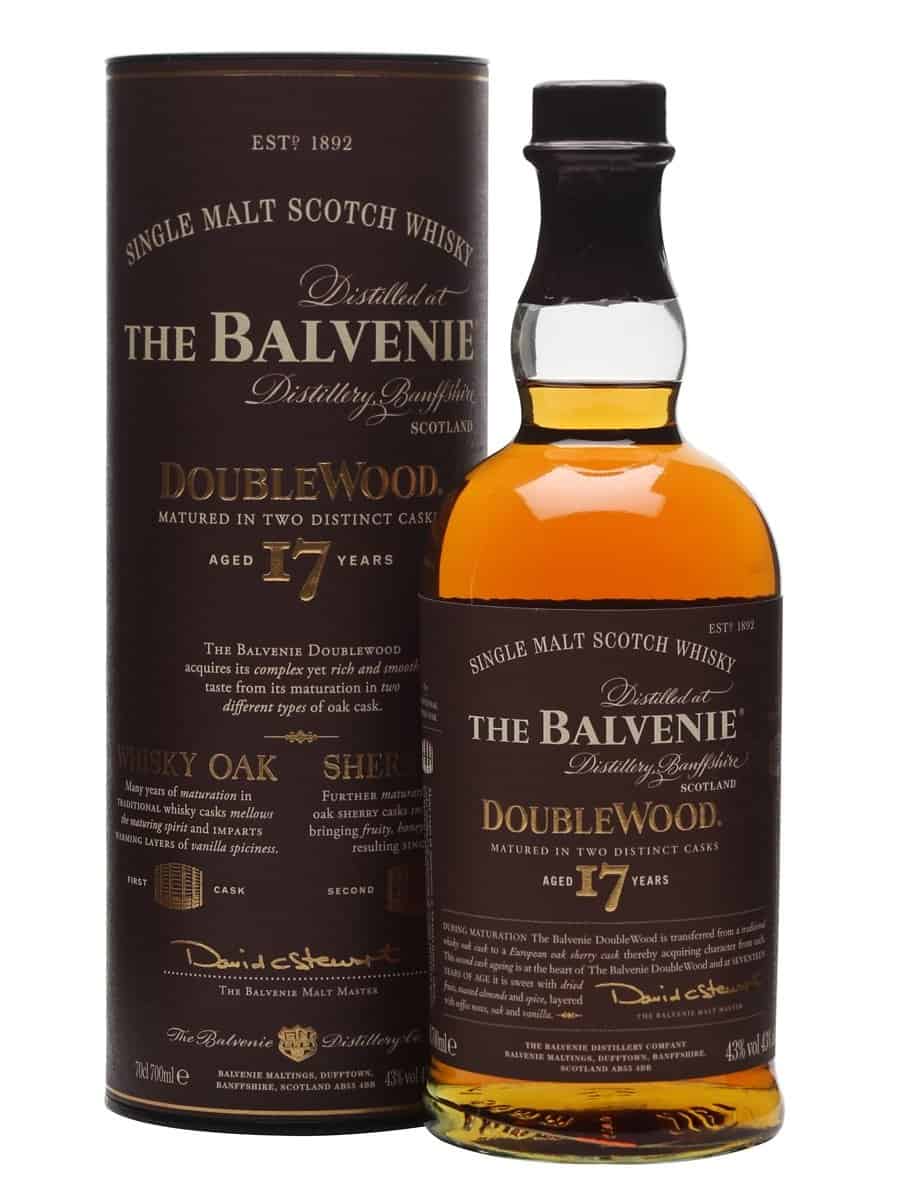 Straight from the heart of the Balvenie distillery, we have a whiskey with 17 years of maturation that has delighted the taste buds of everyone who has tried it. Transitioning from ex-Bourbon oak casks to ex-sherry European oak, the Balvenie 17 Doublewood brings forth many pleasant surprises and a taste that’s not that easily forgotten.

While some might think that the brief sherry maturation has left a negative mark on the overall taste of this delicacy, the truth is that the subtle end result and the fine, elegant taste of the Balvenie 17 Doublewood are easy to recognize among whiskeys that have spent years and years maturing in sherry casks.

The whiskey has released as part of Malt Master David Stewart’s 50-year celebration at the distillery and has made sensation ever since. What makes this whiskey so special and different from the others, you ask? It could be the fact that the price is excellent considering the rich taste, or it could be that the product is basically an upgraded version of the 12-year-old Doublewood.

But alas, doesn’t it all boil down to taste and scent? Sniffing the delicacy that is the Balvenie 17 Doublewood whiskey, you will discover the scent of apple cider and black cherry, but also the fine touch of raw green banana. But what makes this whiskey smells amazing is the combination between malt and fruit, which almost feels like you’re taking a walk among barrels and barrels of this thing. If you are one of the lucky whiskey drinkers, you will also smell pineapple and golden syrup.

The taste of the Balvenie 17 Doublewood will take you on a whole different level. For most people, cherry is the predominant flavor, and regardless of what flavors you feel after that, the sweet taste of fruit will be stuck to your taste buds. As the whiskey slides down the throat, you will begin to feel the pastry-like flavors. It’s almost like eating a cherry pie with a very sweet crust.

The finish of the whiskey clearly brings forth flavors of vanilla, pineapple, and apricots. The after taste is perfect for whiskey lovers that enjoy a fruity drink but especially for those who tried the 12-year-old version and liked it. 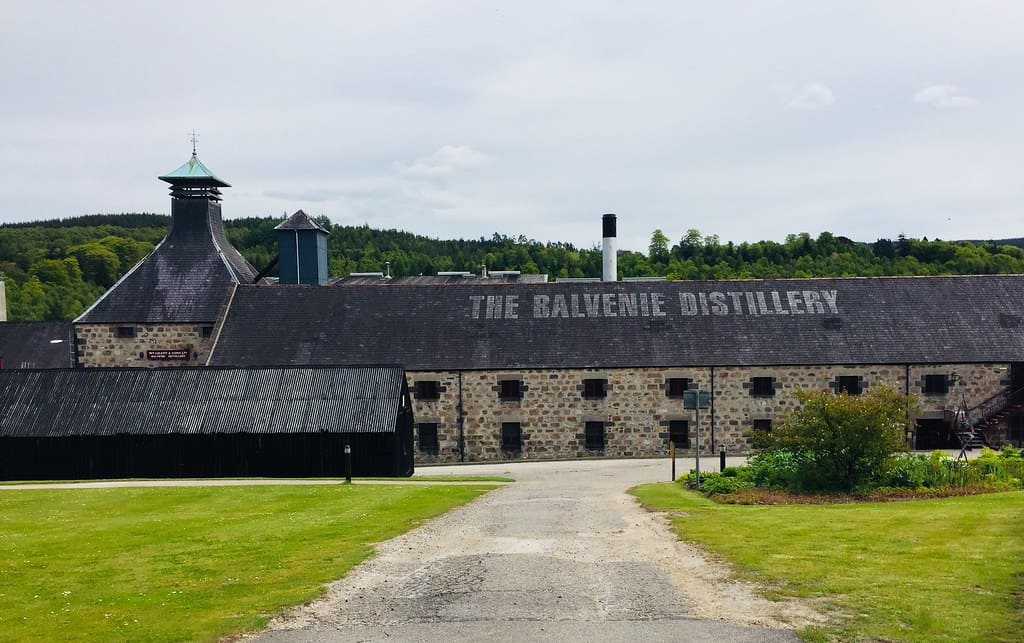 Pros of the Balvenie 17 Doublewood Whiskey

There are plenty of things that you’ll grow to love about the Balvenie 17 Doublewood, especially if you like the idea or a sweet and fruity whiskey with some pastry accents.

The first thing that stands out when you feast your eyes on the bottle is the price. It is surely a breath of fresh air among so many limited edition whiskeys that are overpriced and don’t deliver the same flavor satisfaction as the Balvenie 17 Doublewood.

The second impression that you’ll be left with after having sipped on this gem is the fact that it tastes exquisite and expensive. It clearly wasn’t a whiskey designed for everyone but rather for those who know how to appreciate the fruity accents that are combined with the sweet taste of a pie crust. It’s like eating the finest Cadbury chocolate with whiskey fill that’s designed to heighten the senses and delight your taste buds.

Another thing that’s very distinct about the Balvenie 17 Doublewood is how, in spite of the dried/fresh fruit combination with pastry-like aromas, you will feel the oak remains the center stage. Fans of vanilla will appreciate this whiskey, and true fans of the drink will also taste the dry licorice. It is, indeed, a combination of unique aromas that are so perfectly blended together in a product that’s gentle on the wallet, but also delightful for your taste palette. 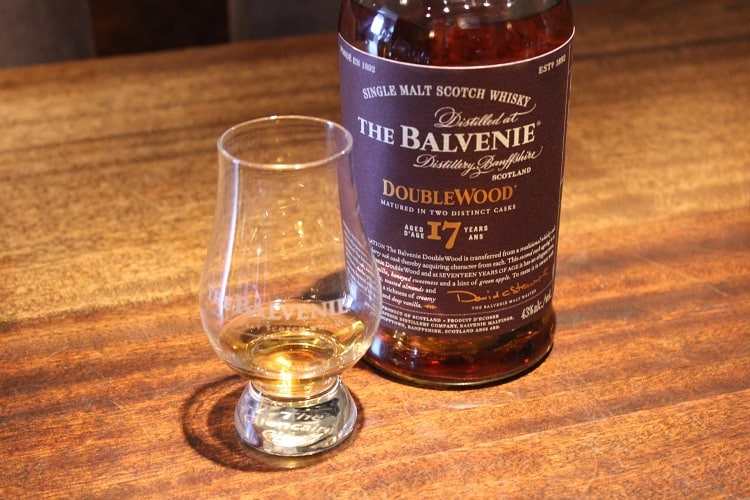 Cons of the Balvenie 17 Doublewood Whiskey

Is there anything you might not like about the Balvenie 17 Doublewood? Objectively speaking, no. If you buy this product knowing what to expect, then rest assured it will exceed those expectations. However, if you’re looking for whiskey with a very strong taste of alcohol and aren’t a fan of fruity and pastry-like aromas, this is not the whiskey for you.

The Balvenie 17 Doublewood is a product that doesn’t really have any cons per se, but it’s easy to find flaws if the combination of aromas isn’t what you expected it to be.

Where is the Balvenie 17 Doublewood whiskey made?

Straight from the heart of Speyside comes the Balvenie distillery, which is found in Dufftown. It is owned by William Grant & Sons.

If you love a sweet whiskey, then yes. It is clear that the Balvenie 17 Doublewood was created to bring forth an amazing combination of sweet fruits and spices, showing off its hints of mango and apple, but without leaving behind aromas like cinnamon and vanilla.

What are the predominant flavors of the Balvenie 17 Doublewood?

First and foremost, we have to tell you that some of you may experience the notes of a whiskey different than others, which is why whiskey reviews gathered from multiple people might tell you something different almost every time.
As far as the Balvenie 17 Doublewood is concerned, we’re pretty sure that you will feel the deep vanilla scent and aroma, but also the sweet taste of dried fruits. You will also notice the creamy toffee notes and be left in satisfaction with hints of cinnamon and toasted almonds.

If you loved Balvenie 17 Doublewood and want to spread your palette wings, then these other great whiskey choices are the perfect alternative to try out.

If you’ve tasted its younger sibling, the 12-year-old Doublewood, you will be a huge fan of its older brother. The age really makes itself noticed with this particular whiskey, as you will see how the cascade of fresh sweet fruit and the sherry imprint blend together to create a delicious whiskey that every true fan will love.

What else is there left to say about the Balvenie 17 Doublewood? When you think about the subtle vanilla aromas, the dried fruit, the apple taste, and the pie crust flavor, it’s almost like someone created the perfect Christmas whiskey. If you’re convinced, then you can get your own bottle at your local liquor store or right here on the Balvenie website.

Ardbeg Kelpie Review: Is It Worth It?

Dalwhinnie 15 Review – The Bridge Between Regions