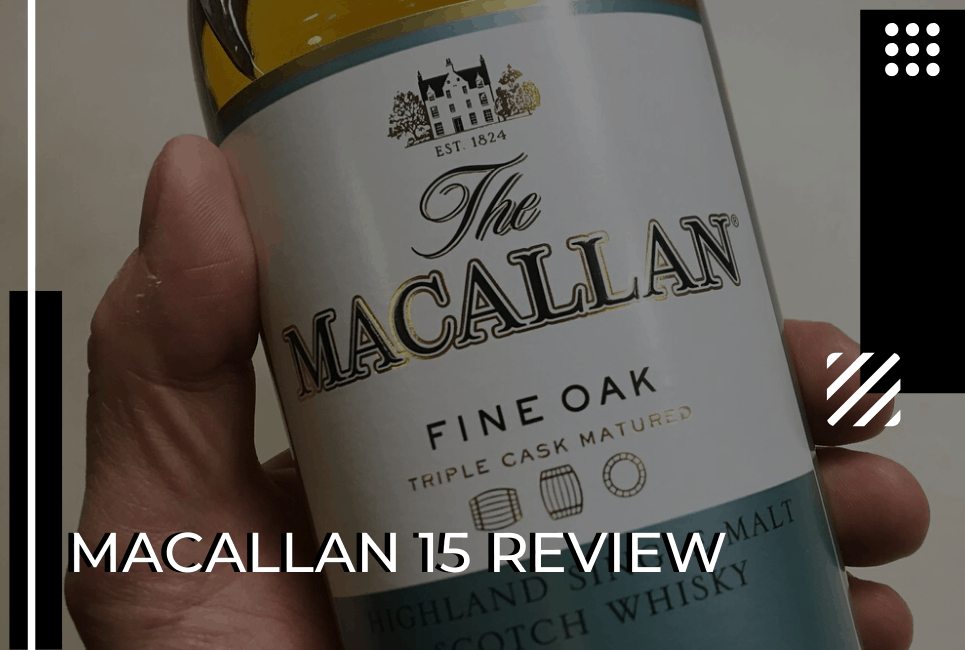 Macallan is known worldwide for exceptional quality in all of their whiskies. They’ve been around for more than 200 years, and they’re so iconic, that they even used to be on banknotes issued by the Bank of Scotland. It’s a premium whisky in line with Johnnie Walker Blue Label.

Macallan is much more than just the Macallan 15, but shedding some light on why the Macallan 15 is an excellent choice whisky will give you a better idea of where to start. You’ll enjoy a great price, exceptional taste, and something that’s loved by beginners and whisky connoisseurs alike. 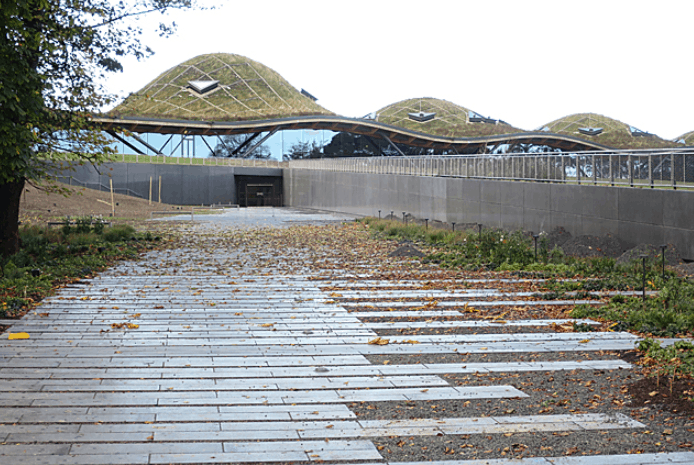 The Macallan Distillery boasts a lot of square footage, huge production, and a reputation bigger than both of them combined. People from all over the world collect Macallan whisky and the Macallan marketing powerhouse has built just the right amount of hype to make it the success it is.

You will always see new releases alongside replicas of older varieties. Many Macallan lovers enjoy the throwback and can appreciate the new with the old. Macallan isn’t afraid to experiment and take risks with new finishes. It endears them to their fans and makes them more relatable.

Macallan’s history is one of steady growth and climbing success. They haven’t had the ebb and flow of a lot of the other Scottish manufacturers, which makes them very lucky, and has probably contributed greatly to their success and popularity. They owe their current image to a solid past.

The distillery is in Craigellachie, Moray Scotland, settled among the hills, and is a modern facility that invites all kinds of visitors. It was founded in 1824 and is one of the first distilleries in Scotland to obtain a license for manufacturing and selling alcohol.

The word Macallan comes from the Gaelic word for ‘fertile land’ and St. Fillan, who was integral in spreading Christianity throughout Scotland in the eighteenth century. It was founded by a barley farmer and teacher named Alexander Reid.

When farming was slow in the winter, the distillery fermented and distilled barley into whisky. While the Macallan Distillery has had several owners since 1824, it is currently owned by the Edrington Group, who purchased it in 1999.

When they installed a second production house and more warehouses in 2008, production capacity increased, leading to the growth that makes Macallan the world’s third largest distillery by size and second largest in production. 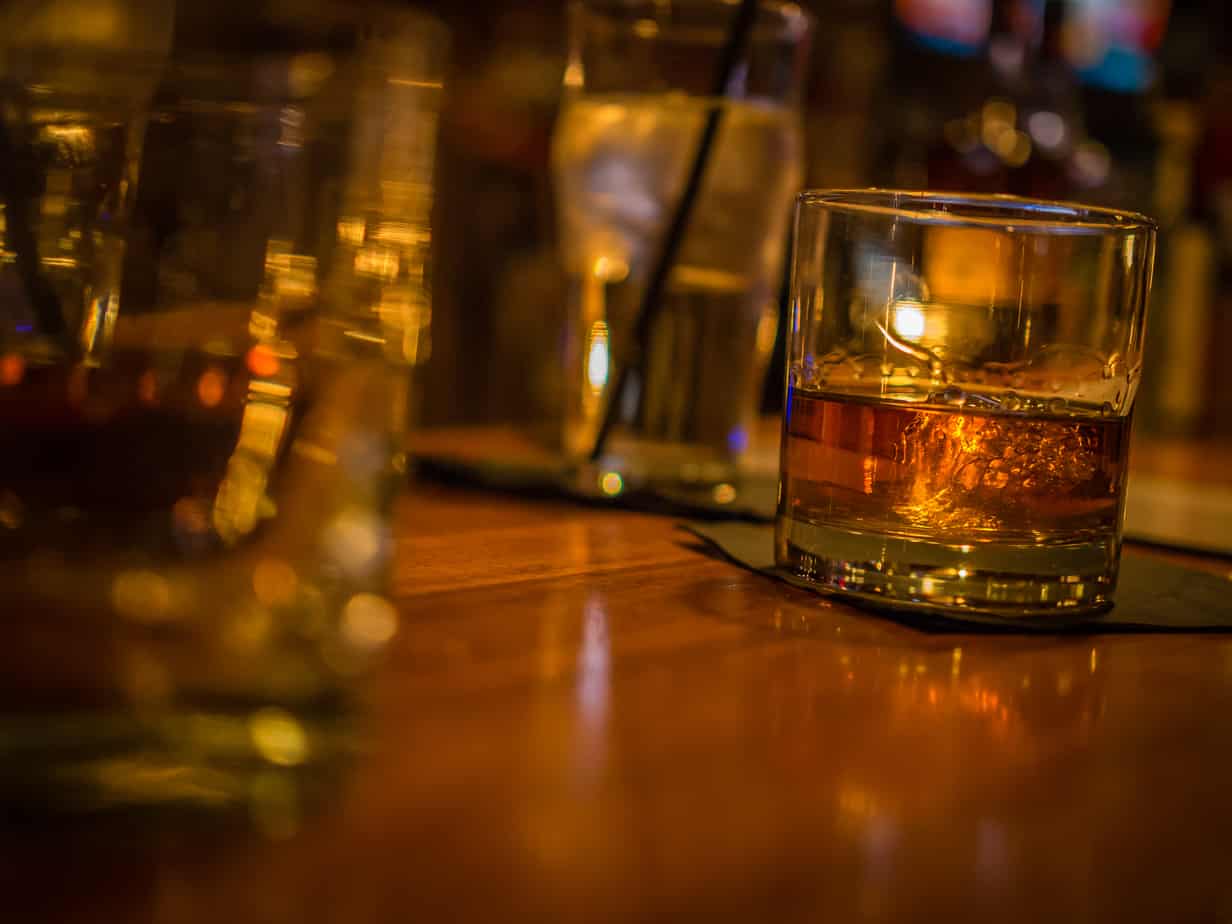 The Macallan 15 is aged in American oak sherry casks, Spanish oak sherry casks, and American oak bourbon casks. They are each matured separately for 15 years and then blended together. What most people tend to appreciate about the Macallan 15 is that it’s not overly smoky. It’s rich and fruity, like a whisky should be, and the smoky notes don’t overpower the more delicate flavors.

In fact, some will say it’s more sophisticated than even the Macallan 18, because the sherry flavor of the 18 can detract from the palate. The nose is truly the most enjoyable part of the Macallan 18, while the rest takes a backseat to the smooth sherry. 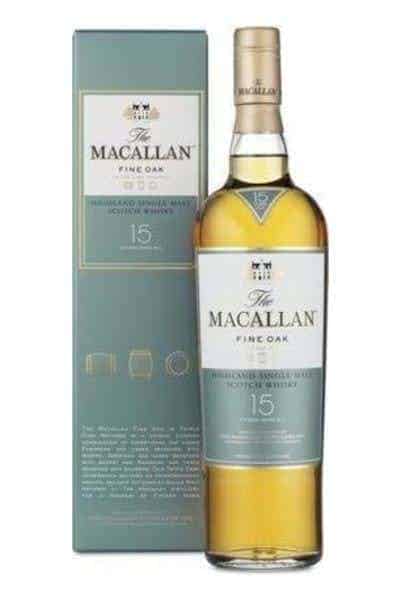 Surprisingly, despite aging in two different types of ex-sherry casks, the sherry in the Macallan 15 is not as noticeable as you might think. Some people prefer it this way, but I’ll leave it to you to try one of each and see for yourself. That’s not to say the Macallan 18, which is rich in sherry flavors, isn’t an excellent whisky, but the Macallan 15 may offer a more varied experience, and for less money, too.

The Macallan 15 is a rich straw color. Because it’s aged for less time, it features a much lighter tint than other Macallan whiskies, and it’s beautiful in the glass. It’s reminiscent of a lovely Chardonnay.

The legs are medium and you’ll notice them clinging to the sides of your glass as if they want to stay there forever. They’re slow, which indicates a substantial volume of alcohol, but it balances nicely with the flavors mentioned later.

Keep in mind that age and color are not an indication of character or quality. Many people will argue for better quality in longer aging, but the Macallan doesn’t need it. This elegant color sets the tone for a laid back, relaxing sip on a crisp, summer day.

You’ll first notice some tantalizing aromas of rose and cinnamon on the nose. Wildflowers mingle nicely with oak spices, giving it depth of character. It tickles your nose and offers a delicate experience even before taking your first sip.

The taste of the Macallan 15 starts out particularly sweet and incredibly smooth, like maple syrup. It turns quickly to piney and green, but it still doesn’t overpower the more intricate flavors of the sweet and aromatic wildflowers.

You may also find Macallan 15 to be called Macallan 15 Fine Oak in some places. These are one and the same, but the Fine Oak designation does a good job of describing some of these woody flavors. You may also begin to notice raisin, orange, and chocolate flavors leading into the finish. You may notice the bitterness of the orange more so than the chocolate, but if you concentrate, it’s a wonderful mix of the two.

The finish is long and lingering. A whisky this good should stick around for a while, so you’ll be pleasantly surprised that it does. It’s more dry and bitter than when we began, with orange, clove, and chocolate. Mixing with a few drops of water may bring out some more peppery flavors, which balances the sweet out with the spicy, and makes it even more deep and rich. Try it both ways before deciding which you like best. 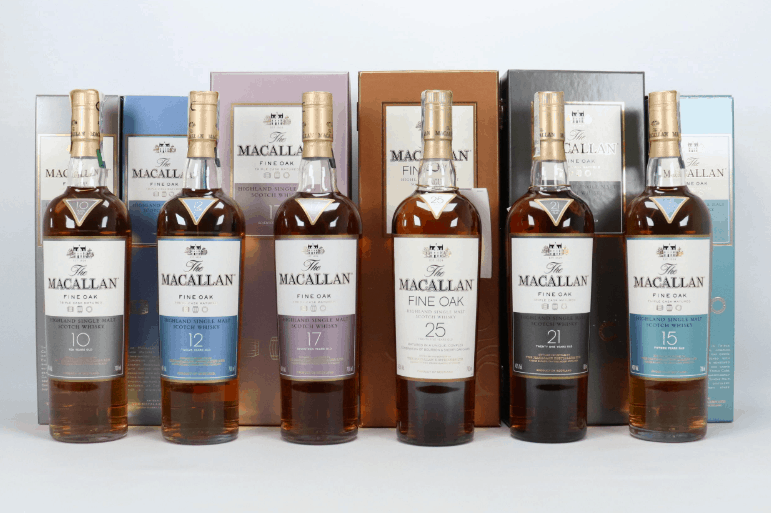 Because Macallan is so popular, their whiskies tend to be on the higher end of the price spectrum. If you’re looking for an excellent sip at a more affordable price, take a look at some of these alternatives.

The Glengoyne 15 is brighter and more tropical. However, you’ll still enjoy a similar spicy oak finish. Search for hints of pineapple and lemon in the palate with a bourbon influence. All of this balances nicely with a rich, sherry wood intensity.

You won’t find this to be overtly sherry-flavored either, but instead, the hints of sherry offers a smooth drinking experience that makes a more affordable whisky seem a bit more premium. 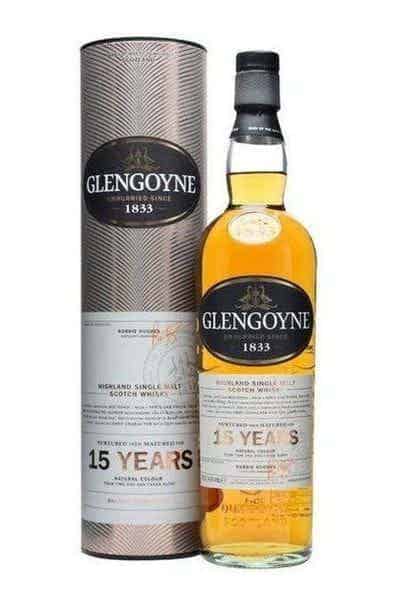 This is the taste of distilling slower than anyone in Scotland, and of barley we dry by air, never peat. The flavours develop in hand-selected sherry casks – balancing deep character with light vanilla notes. 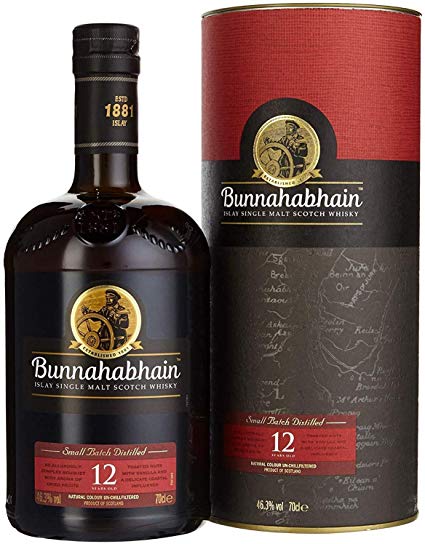 At a considerably lower price point sits the Bunnahabhain 12. You may not have heard of it, but don’t dismiss it just yet. It has a soft and supple palate with sherry undertones. It’s a bit sweet, but you’ll also enjoy a rich, nutty taste.

The sherry is still not as overpowering as the Macallan 18 and the finish is herbaceous, salty, and a bit tangy. It’s a unique sip and worth it for something very refreshingly different. It doesn’t get a lot of love because it’s only aged for 12 years, but age doesn’t always equal quality, and this is a prime example of a premium whisky that has not been aged long and does not cost a fortune. 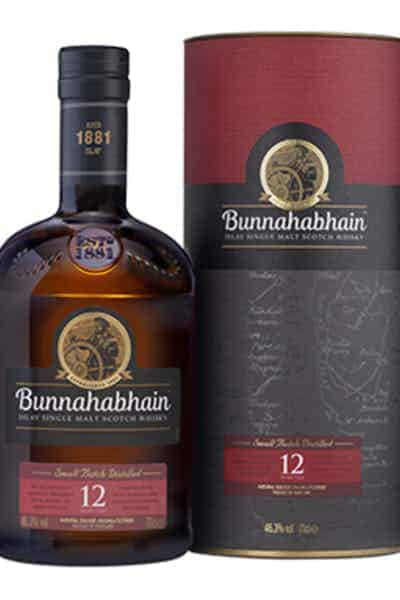 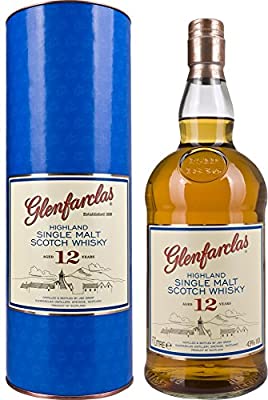 The Glenfarclas 12 is another classic example of excellent, affordable whisky not aged long. It’s creamy and light with a soft honey and sherry nose. You’ll also notice hints of rich oak and smoke that are not overpowering.

It’s well balanced and medium-bodied with a palate of walnut cake, dates, toffee apple, forest floor, and smoke. The finish is full of cinnamon and spice, cloves, sherry, and orange zest. 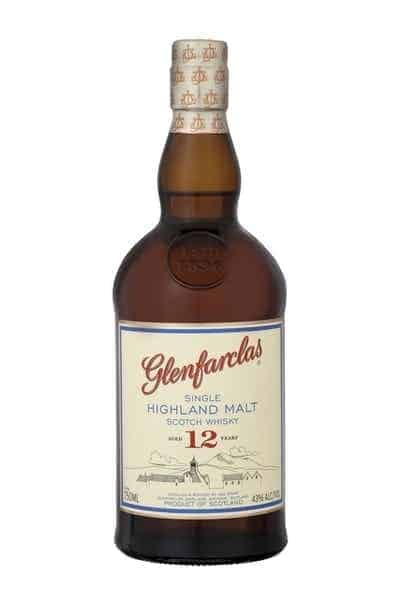 In 2006, this was named the 'Best Sherried Whisky' in the Single Malt World Cup. More recently, Olenfarclas 12 Years Old won Gold at the Stockholm Beer & Whisky Festival in 2007 and again in 2008.

How much is a bottle of Macallan 15?

Any Macallan you try is going to be good. Because they’re known for quality, Macallan takes great care in crafting their whiskies so that everyone will love them. If you’re new to the confusing world of whisky, don’t be shy. Macallan 15 is a great entry point.

For those who have a bit more experience, there’s still a lot here to love. You won’t be disappointed if you decide to give the Macallan 15 a shot.

Why is Macallan expensive?

Macallan is known for using premium ingredients, including the barley that’s specially grown for the distillery. The aged barrels are carefully chosen, and producing Macallan costs more than other whiskies, so buying it costs more as well.

The barley alone costs 30-40% more than other whiskies. You’ll find that any Macallan bottle is worth the cost for a premium whisky.

How much is a 50 year old Macallan?

If you’re interested in a Macallan that’s more exclusive than the Macallan 15, there’s Macallan 18, Macallan 25, and Macallan 50. There are only 200 bottles of Macallan 50 worldwine, 35 of which are in the United States. You’ll pay around $35,000 for one, and that’s only if you can find it.

While Glenlivet is delicate and soft, Macallan is dark and oaky. They’re both from Speyside, but other than that, there’s no direct comparison. It all comes down to your flavor preferences, but they’re both worth it.

People worldwide love Macallan for their excellent whisky. They consistently produce quality whisky time after time. They have set the bar high for single malt Scotch because their aging process gives it character and balance. These attributes make Macallan highly recognizable.

It’s unique because they do quality and consistency better than many other whisky manufacturers today. Instead of focusing on being a large production house, they’ve stayed true to the quality that’s important.

In doing that, they’ve been able to achieve both large production numbers and high standards of quality. They may seem like a high-volume producer of average whisky, but they have more than just the bottom line on their minds.

What are you waiting for? The Macallan 15 is another quality bottling from Macallan and is definitely worth taking the time to try it. You’ll pay quite a bit less than the Macallan 18 and you’ll still get the same consistent quality you have come to expect.

With more delicate flavors, balanced character, and rich, lingering finish, every sip is a brand new experience. It’s hard to get tired of something so delightfully complex…

Macallan 12 vs 18: Does the Price Make a Difference?

Bourbon vs Scotch: What’s the Difference?

The Best Islay Scotch Ranked: The Smoky Jewel of Scotch!