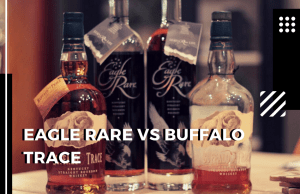 The Buffalo Trace Distillery distills and distributes both Eagle Rare and Buffalo Trace bourbon whiskey. Like many other bourbon and whiskey distilleries, it’s located in Kentucky. Eagle Rare has been around quite a bit longer than Buffalo Trace, but they each have their place among bourbon lovers. While they come from the same recipe, their flavor profiles are slightly different.