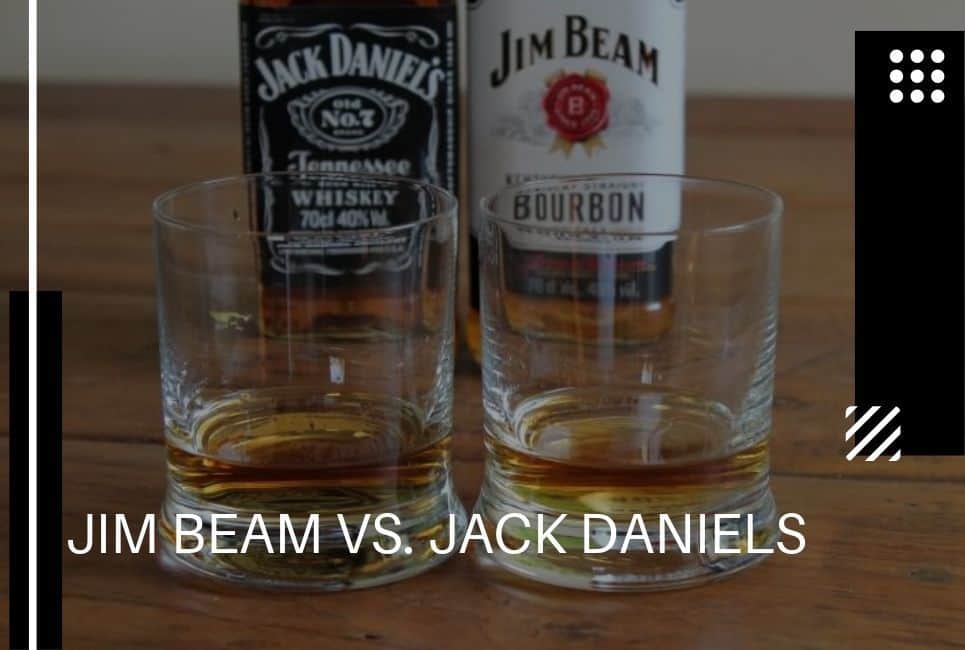 Two of the most popular brands of alcohol and American whiskey in the United States are Jim Beam and Jack Daniels. If you’re attending a party, sitting at a bar, or relaxing with some friends, chances are good that you’ll see one bottle or both of these labels.

However, many people believe that these two whisky beverages are one in the same, or very similar to one another. The truth is, Jim Beam and Jack Daniels are distinctly different in several ways. For example, one is a bourbon made in Kentucky, while the other is a whiskey distilled in Tennessee.

For our Jim Beam and Jack Daniels whisky comparison, we’ll dig down into what makes these two labels so successful, what they have in common, and how they differ.

Let’s get started with some of the differences between the two American whiskey brands.

The Main Differences Between Jim Beam vs Jack Daniels

The main differences between Jim Beam vs Jack Daniels are: 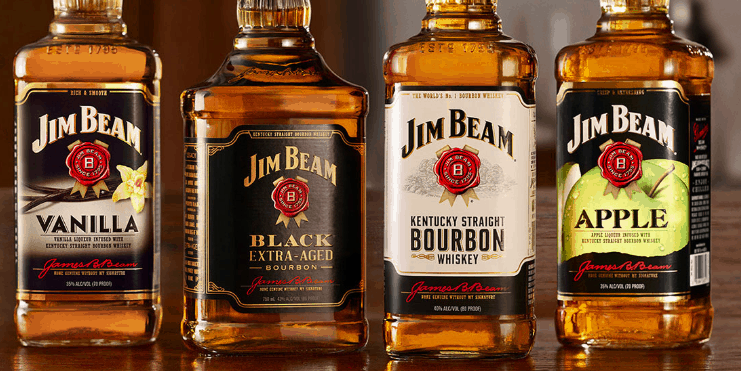 Let’s move on to Jim Beam. This Kentucky bourbon whiskey is owned and operated by Beam Suntory. What surprises most people is that Jim Beam is the number one selling bourbon brand around the globe (note the distinction from whiskey).

Established in 1795, Jim Beam has been managed by the same family for seven generations maintaining the flavor of this good bourbon. This Kentucky bourbon has used the same formula and process since it was founded in the 18th century.

Johannes “Jacob” Boehm established the first Jim Beam distillery. Although he was of German descent, Jacob later changed his last name to the more anglo-sounding “Beam.”

It was announced in 2014 that Jim Beam, Inc. was going to be sold to a Japanese group for $13.6 billion USD. These distillers and brewers, who are part of Suntory Holdings, Ltd., are known for developing the first whisky in Japan.

When the Jim Beam and Suntory Holdings portfolios are combined, they boast an imposing lineup. Their offerings include the following:

You can find Jim Beam bourbon in over 200 countries and territories around the world. The countries in which Jim Beam is most popular include: 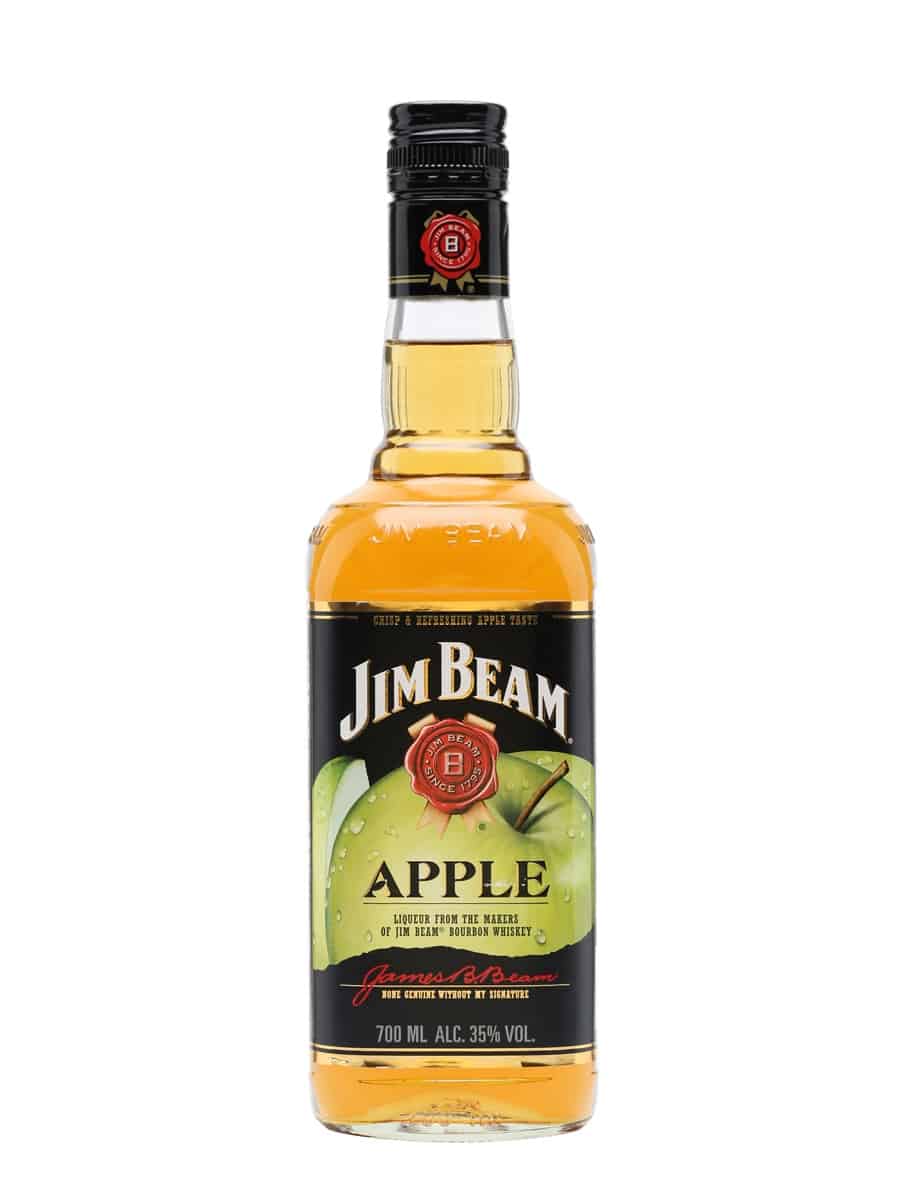 A 2015 addition to the Jim Beam range of flavoured bourbons, this apple version is refreshingly crisp and pairs especially well in a long drink with tonic. 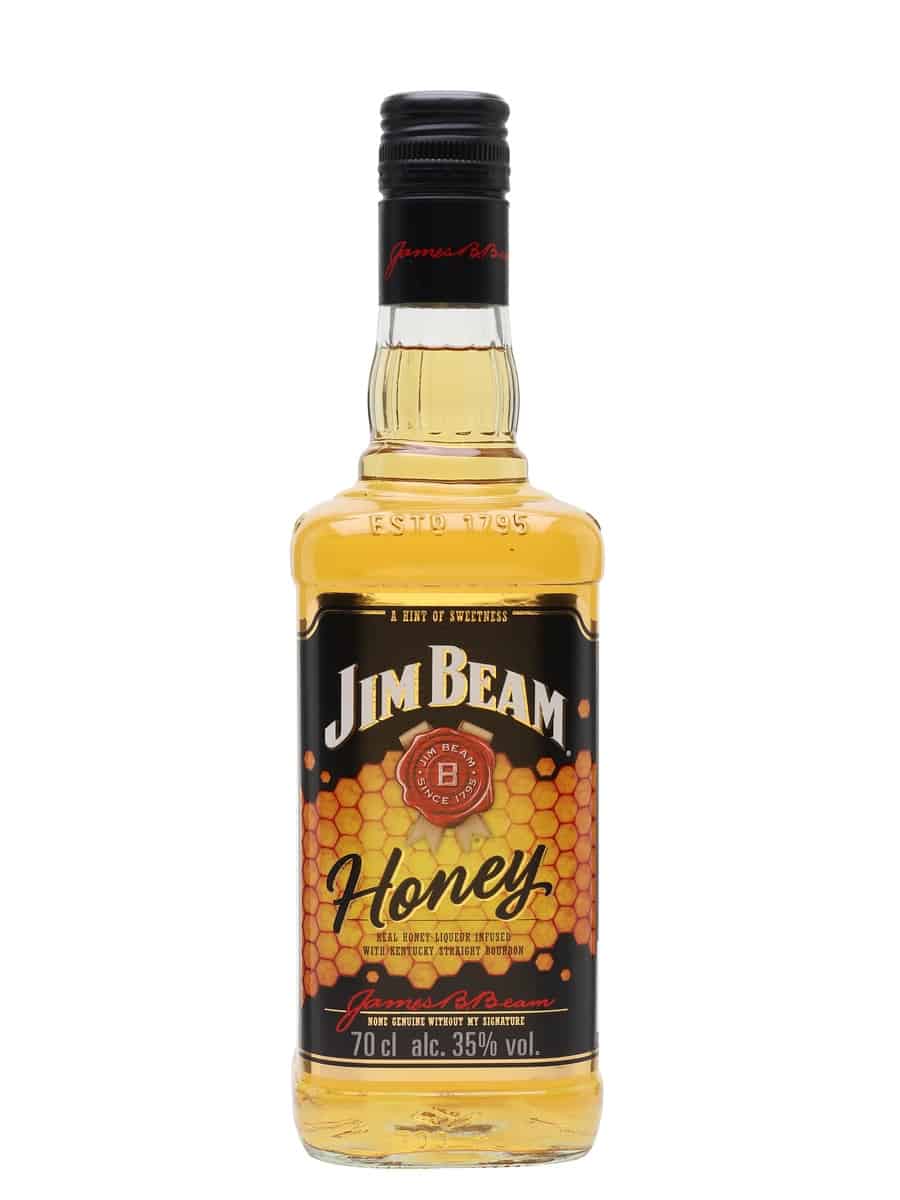 Made with Jim Beam's bourbon and real golden honey. Notes of vanilla, caramel, and oak with a superb honey finish. We recommend having this slightly chilled or over ice. 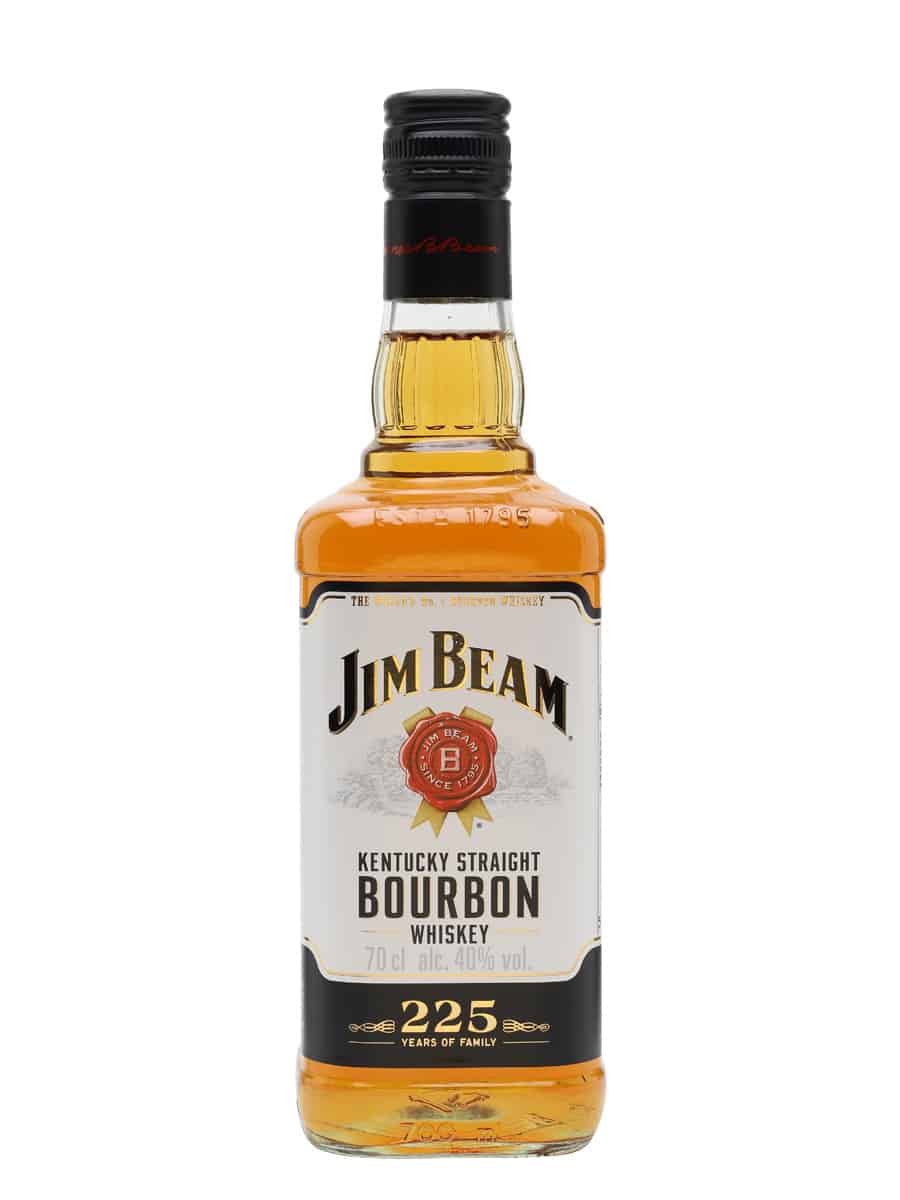 Made to the same formula since 1795, this giant of the category is aged for four years in oak barrels to create a smooth, mellow taste with hints of spice.

The Jim Beam Whiskey Bourbon lineup is extensive and offers a wide variety of options. Here’s a look at some of the more popular choices from Jim Beam:

This complex yet rich whiskey includes hints of butterscotch, fudge, fruits, cereals, and sweet spice. It has a long finish and smells of oak and smoke.

Devil’s Cut has a woody and complex taste, which is dominated by oak and vanilla. If you like sweet whiskey, this is the perfect choice for you. This option from Jim Beam is infused with the whiskey from its wooden casks.

This offering from Jim Beam consists of sweet almonds, brown sugar, and provides hints of rye and wood aromas. Distillers Masterpiece is a well-balanced and soft whiskey, which includes notes of cooked fruits and caramelized sugar.

The Green Label selection from Jim Beam is aged for five years. It is charcoal filtered and offers a smooth, smokey taste. This is the ideal choice for those who enjoy bourbon cocktails.

Jacob’s Ghost is a white whiskey that is aged in white oak barrels for one year, then filtered. The taste of this whiskey will have you thinking of sweet cereals and a day at the beach.

Signature Craft agest for over a decade (12 years to be exact) in oak casks. The sweet aromas you’ll discover with this offering from Jim Beam includes honey, vanilla, cinnamon, and smoke. The sweet taste of marzipan, vanilla, and maple are present in this bourbon, as well as an aftertaste of vanilla and smoke.

The Signature Craft Quarter Cask is aged in casks that are smaller than the traditional Signature Craft. This type of aging creates intense woody aromas, along with a sweet and soft palette that gives you a pleasant taste.

Single Barrel bourbon comes in individual bottles, which are made up of aromas like caramel, vanilla, oak, toffee, and nutmeg. Some of the medium-length offerings finish with traces of oak and cocoa.

Jim Beam’s White Label is the original bourbon from the 1795 distillery. This bourbon ages in oak barrels for four years, and contains the smooth hints of spice traditional drinkers are most familiar with.

In 2010, Yellow Label was the winner of the “Best Rye Aged Under 10 Years” category. This bourbon will surprise you with aromas of caramel, nutmeg, cherries, and spices. You’ll discover a long aftertaste with plenty of warm flavors that will remind you of cherries, lemons, and pepper. 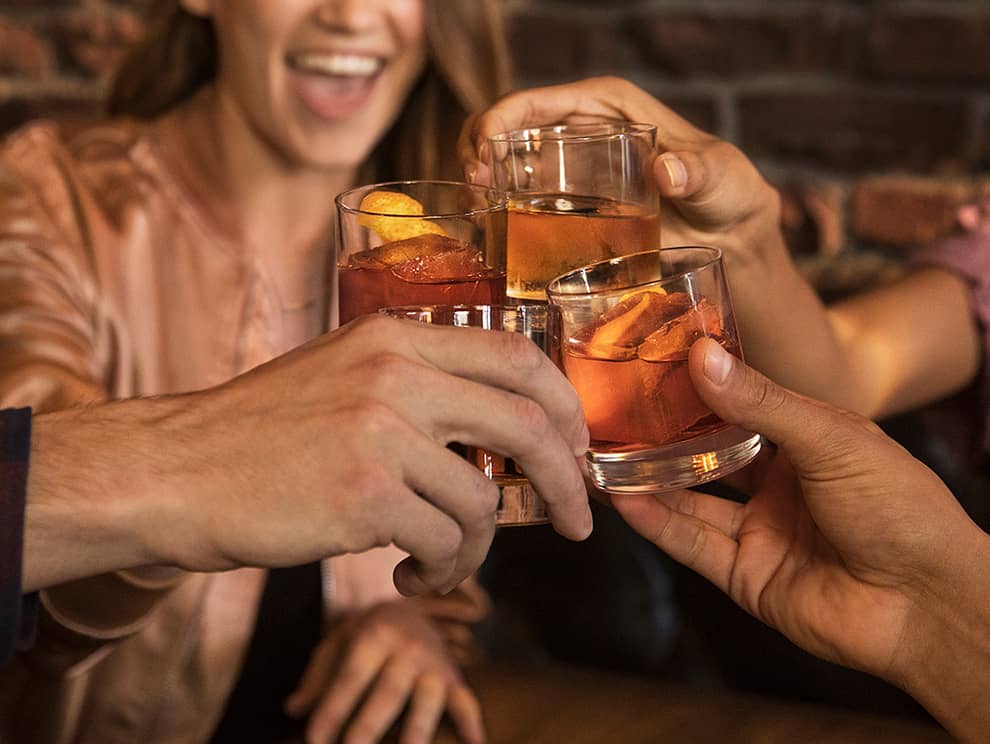 Jim Beam is copper in color and has thin legs that create shapes like hearty, robust waves on the side of your glass. It will turn cloudy when you add ice to it.

Every bottle of Jim Beam smells a bit like fresh-cut hay, a hint of sweetness, a touch of vanilla, and a whiff of cornfields.0

The initial taste of Jim Beam is watered down and thin. However, once you’re past that, you’ll notice a taste of vanilla, corn, and a note of sourness. The sour taste is due to the fact that Jim Beam is distilled by using corn mash, which has been fermented in oak barrels.

Jim Beam has a long fermentation process which consists of distillation twice and aging for at least four years in charred American oak casks. This helps to create the flavor of wood that Jim Beams bourbons are most famous for.

You’ll get a long finish with a Jim Beam bourbon, with corn, watery caramel, citrus, and just a hint of oak. 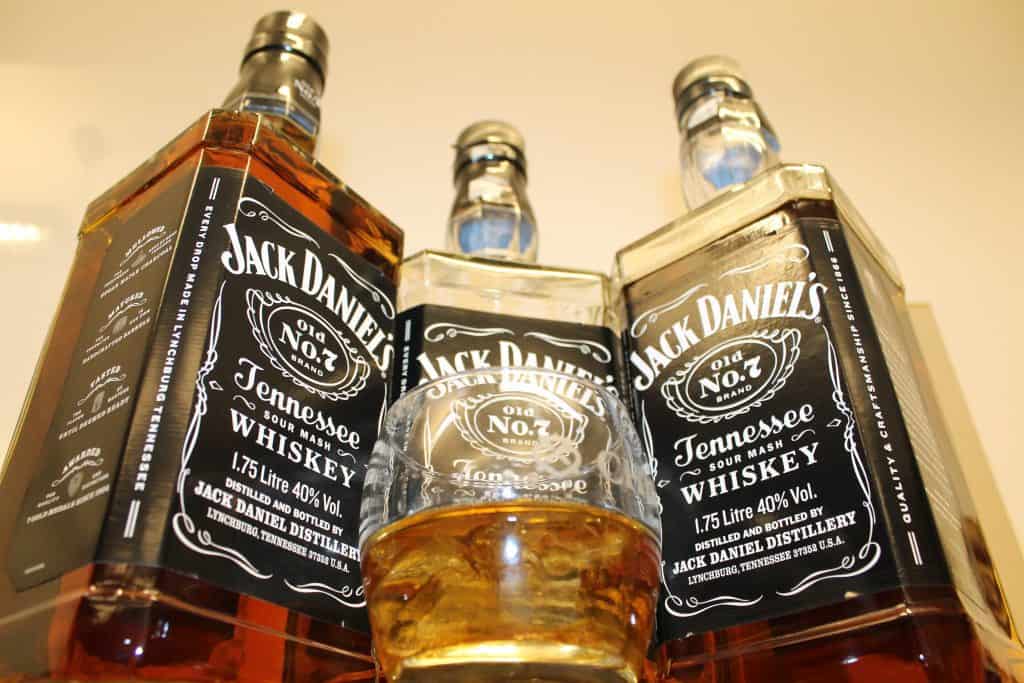 Moving on to Jack Daniels, which is a type of whiskey made in Tennessee. This popular label is produced and owned by the Brown-Foreman Corporation.

Jack Daniels whiskey goes through a specific distillation process that earns it the designation as a Tennessee whiskey. This is a term which the federal government recognized in 1941, which was roughly 80 years after Jasper Newton Daniel began distilling the now-famous whiskey.

Those familiar with the history of the whiskey say that Daniel learned how to distilling from the good Reverend Dan Call. In 1866, Jasper purchased the land on which the distillery remains to this day.

Some distilleries claim to be the oldest in the United States, however, none can show proof of registration that dates back as far as Jack Daniels.

While no one knows the actual reason why Jack Daniels bottles are adorned with the No. 7 logo, there are a few rumors circulating that claim the following: 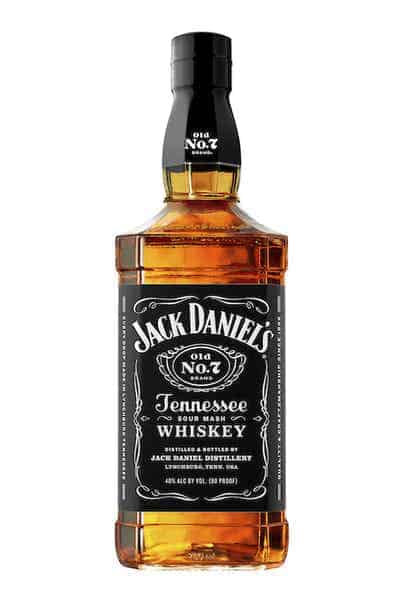 Made from the finest corn, rye, and barley malt these choice grains are mixed with the iron-free water that flows from the Cave Spring found on the distillery grounds. 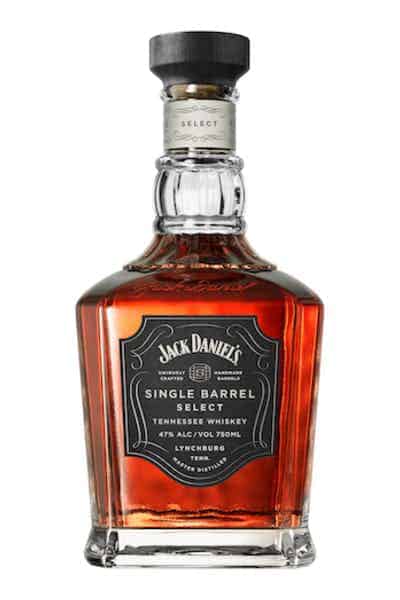 Jack Daniel’s Single Barrel Select is hand selected from the highest reaches of the barrel house and bottled in the smallest of batches, just one barrel at a time, at 94 proof with robust character and notes of caramel and spice. 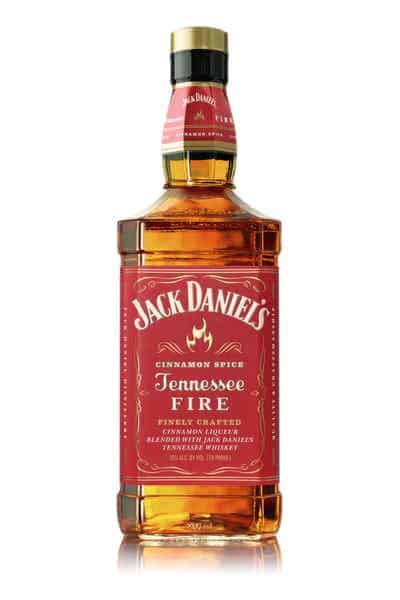 To create unique and individual flavors, in an effort to appeal to a wider variety of palates, Jack Daniels’ offerings go through different mellowing processes, use different ingredients, and go through various maturing methods.

Jack Daniels has a smooth and woody smell. You’ll also notice hints of vanilla and caramel, along with notes of oak and fruit.

When drinking Jack Daniels, the first thing you’ll get is a sweet taste with a light body. You’ll notice hints of perfumed wood, cinnamon, and touches of orange as well.

Jim Beam vs. Jack Daniels – Which One Do You Prefer? 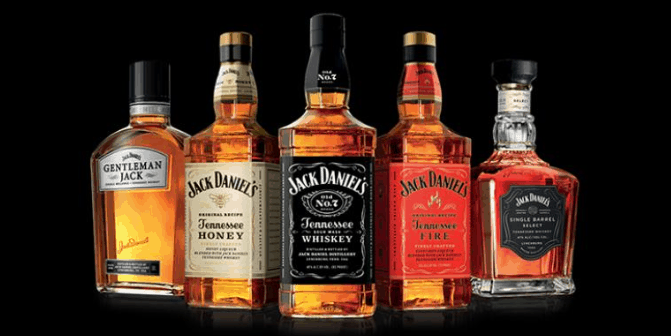 These two finely crafted whiskeys are among the best in the world. Though they’re manufactured through similar methods, Jack Daniels has the label of being a Tennessee liquor. That means is goes through charcoal filtration as part of its distillation process.

Jim Beam, on the other hand, is a Kentucky bourbon, which is distilled through the use of corn mash which has been fermented in wood oak barrels. If you’re looking for a good foundation to use for mixed drinks, then consider Jim Beam, although it works just as well neat in a tumbler.

Comparatively, Jack Daniels Old No. 7 is one of, if not the most recognizable whiskeys in the United States and one of the best selling in the world. No matter which offer you choose, you’re sure to have a pleasant and satisfying experience.

Choosing between Jim Beam and Jack Daniels is really simply a matter of choice. Do you want a bourbon or a whiskey? Would you like a thin, woody taste or a sweet, light-body drink? Everyone has their favorites when it comes to these two popular labels. Which one do you prefer?

Which cocktails can I make with Jim Beam?

Which cocktails can I make with Jack Daniels?

What is a good mix for Jack Daniels and Jim Beam?

Maker’s Mark vs Knob Creek: Which is the Best Bourbon Brand?