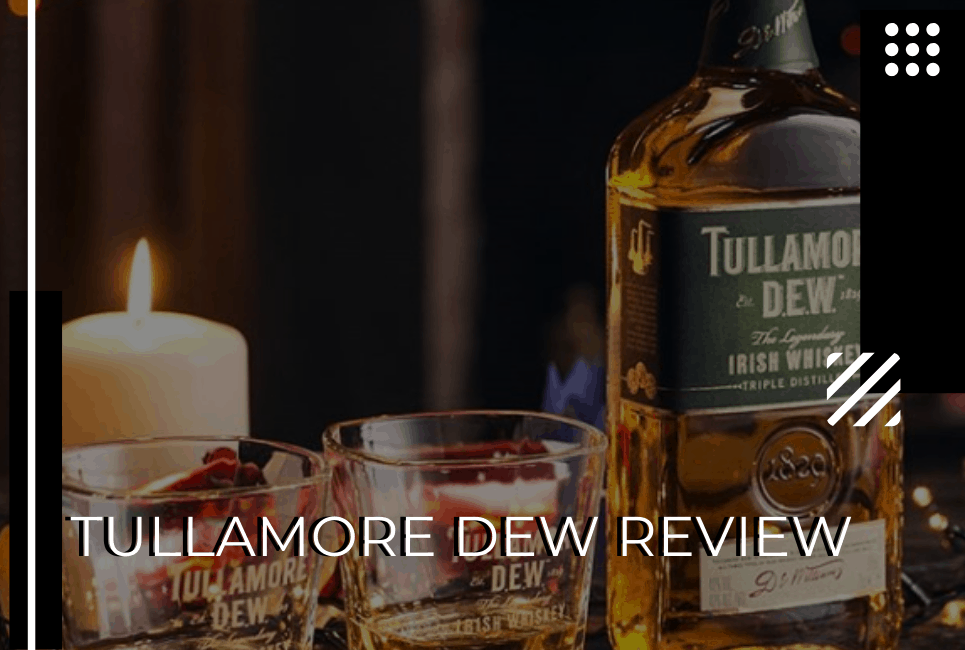 Tullamore Dew is a blended Irish Whiskey. It’s a great go-to whisky for an affordable mixer or even to sip from time to time. Unlike a lot of other Irish or Scottish whiskeys, Tullamore Dew has a sense of malt, despite there not being too much malt in it.

It’s approachable, and it’s immensely popular in overseas markets. Its sales are second to Jameson, but likely only because not as many people have had the nerve to try it. Once you do, you may find that it’s comparable, or even better. Let’s dive into this Tullamore Dew Whisky Review

Tullamore Dew is a pot still whiskey made using a blend of Irish malt and grain. It’s bottled at 40% ABV. Their legendary whiskey-making process is based on the number three. It contains three natural ingredients, three-grain distillation varieties, and three maturation casks.

This triple blended whiskey, triple distilled, and triple matured have an award-winning taste and plenty of Irish character. It was won 21 awards in the past 20 years, including a gold medal in 2008 at the International Wine and Spirits Competition and double gold at the World Spirits Competition.

While the Tullamore Dew Irish whiskey probably won’t knock your socks off if you’re an experienced whiskey drinker, it will wow the novice experimenter. It’s great for mixing with cocktails and it’s drinkable neat or on the rocks. The dark notes in the aroma and palate make it more interesting than the honied fruit that normally dominates the blended Irish whiskey category, making it a slightly more interesting choice than some of the others.

The term whiskey comes from the phrase “water of life” and on the Emerald Isle, that’s just what whiskey is. Irish whiskey was born long before Guinness and long before people started adding green food coloring to their beer stateside.

St. Patrick may or may not be the legend we think he is, but whiskey in Ireland dates back to the middle ages. So, what makes it different? Spelling, for one. The Irish distillers and the Americans make whiskey, while the Scots and the Canadians make whisky.

There’s more to it than just that. Irish whisky is made differently than Scotch whiskey. Whiskey blended from malted and unmalted barley in a pot still while whiskey is made from malted barley only and dried over peat smoke. Scotch is distilled twice while Irish whiskey is typically triple distilled. The triple distillation makes a smoother spirit with higher alcohol content. Whiskey tastes more like the grain it’s made from than whiskey. 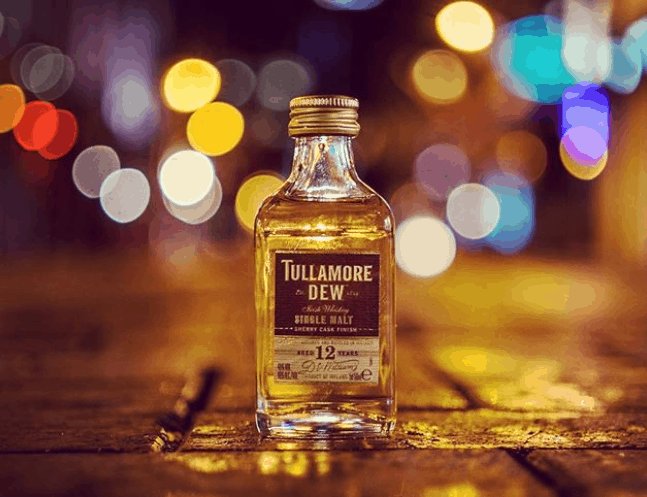 Tullamore Dew was a pot still whiskey when it was first developed in 1829. It’s named for the area where it originated. The town of Tullamore is nestled in the Irish Midlands and the whiskey was made here under the name Tullamore until Daniel E. Williams took the business over in the late nineteenth century.

The name changed to Tullamore Dew (Daniel’s initials) and the distillery took off. Unfortunately, during Prohibition, distilleries everywhere suffered. Tullamore Dew survived through the 1930s and past the World War II shortages to come out victorious on the other side.

Daniel’s grandson, Edmund, created Irish Mist in the mid-1940s but quickly moved back to blending Irish whiskey at the distillery. He was instrumental in creating the Irish Coffee we know today and Tullamore Dew is the Irish whiskey he used.

The modern Tullamore Dew that we drink today is a product of this post-war production. But there’s a lot more history in between. The Tullamore distillery closed in 1954 when production was moved to the New Midleton Distillery in Cork.

The Tullamore label sold to Powers in the 1960s and the brand who owned the name now focused more on Jameson, Powers, and Paddy whiskeys. As a result of the changing hands and the consolidation, it was no surprise that Tullamore fell behind other big brand names.

For many years in the later half of the twentieth century, consolidation was rampant, and there were only two distilleries in all of the Republic of Ireland. However, by the early 2000s, everything changed. Grant’s bought the Tullamore label in 2010 and built a new distillery in Tullamore. Today, Tullamore is original blended Irish whiskey  in its original home amid rich history of the first distillery and the people who perfected it.

The package is modest, and doesn’t really catch the eye as it sits next to other whiskeys on the shelf. They didn’t pour as much money into the packaging as they did the process, so don’t judge this book by its cover.

It comes in a rectangular bottle that’s rounded on the edges. It has a simple, dark green label and it’s topped with a metal screw cap. Some higher-priced whiskeys come corked, but this bottle is easy to open, sip, and seal back up for later. 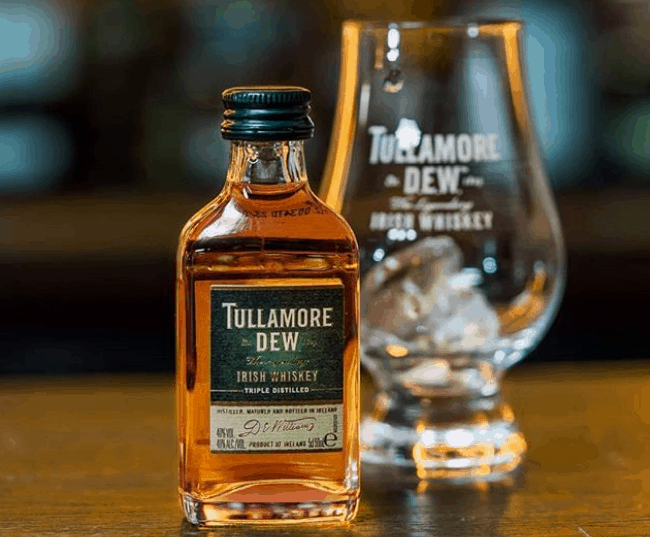 Tullamore Dew taste is surprisingly complex for a whiskey in its class. It’s an entry-level whiskey at an accessible price point, but it’s buttery smooth rather than smoky or spicy taste. It’s a great whiskey of choice for novice whiskey lovers. You may also be interested to know that it’s had it’s fifteen minutes of fame as the whiskey of choice for Stieg Larsson’s protagonist, Lisbeth Salander, in the Girl With the Dragon Tattoo.

Tullamore Dew has a toffee tint in the bottle and looks like honey in the glass.

It smells of sweet citruses like red apples, banana chips, and dried fruit. You’ll also notice some honey, toffee, vanilla, and woody aromas. It can smell a bit grainy or malty as well. On the nose, Tullamore Dew is more complex than a lot of others in its class. It’s dynamic and interesting.

Surprisingly, Tullamore Dew is an excellent sipping whiskey. It’s sweet and smooth. It’s not too heavy on the palate like a lot of other smoky or spicy whiskeys. The malty flavor and slight woodiness add some complexity, but they’re not overpowering.

The finish is smooth and light, so it sneaks away rather than leaving you with a stunning aftershock. As it fades, you’ll find more toffee, dried fruit, and malt.

Tullamore Dew has a medium body with a balance that could be better, but is fine for its price point. It has a buttery feel in the mouth and is silky and smooth. 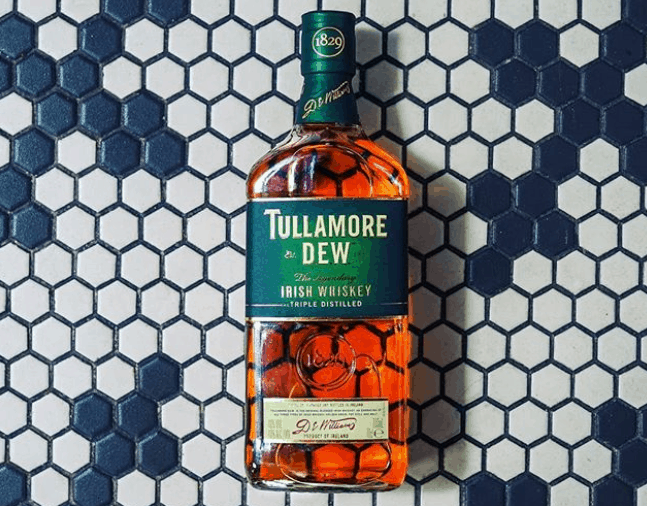 If you like Irish whiskey, there are plenty of other options to try. Here are some that top the list, in case you’re on the lookout for something that’s either similar to Tullamore Dew, or very different.

Paddy Irish whiskey is slightly cheaper than Tullamore, and until the early 2000s, they were owned by the same label and made in the same distillery. It’s from Cork, which has appeal for those across the pond who have heard of Cork, but never heard of Tullamore.

It’s smooth, but the flavor is light, and a tad too bland for even some novice whiskey drinkers. While it’s affordable and accessible to almost anyone, it’s not always the best choice if you want complexity. 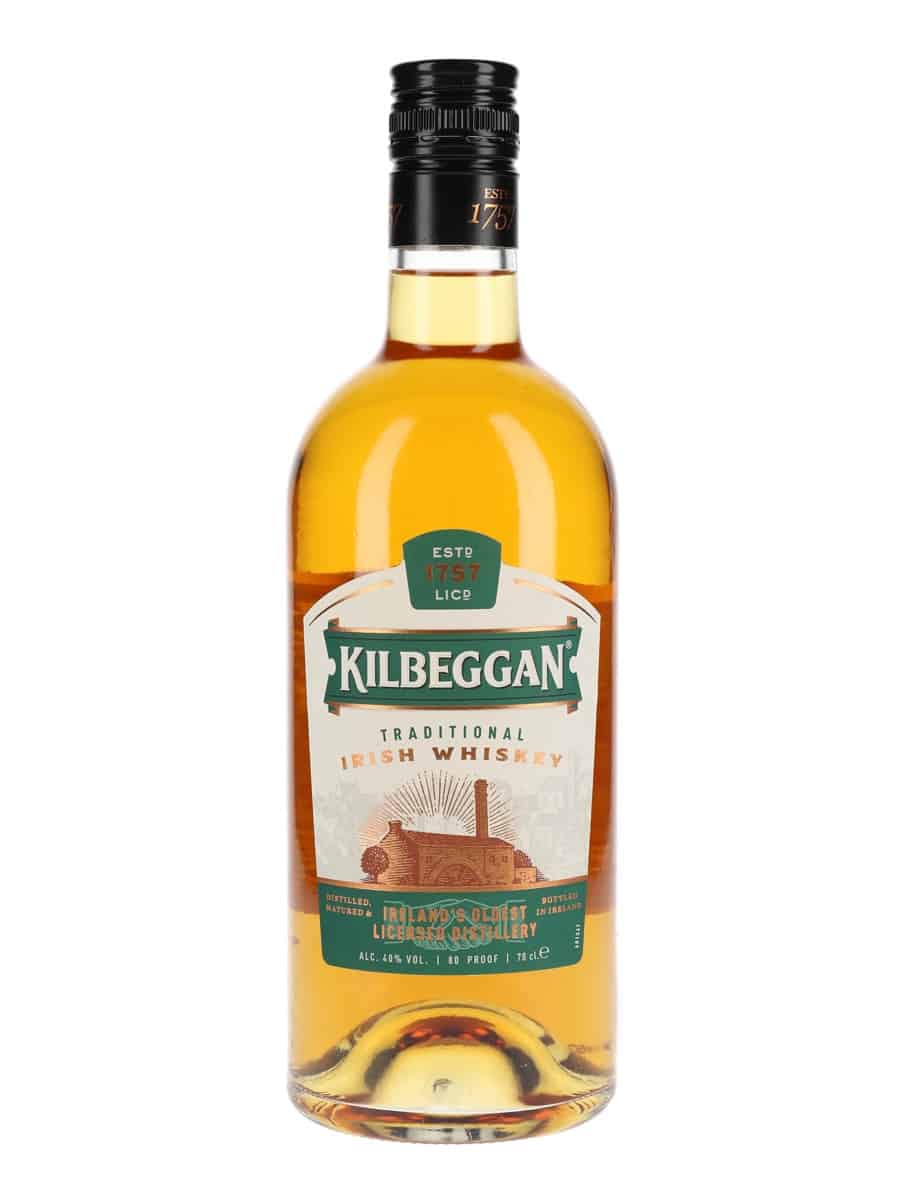 The unique thing about Kilbeggan is that it has cinnamon and sweet corn notes. It’s more like bourbon than whiskey, which gives it a deeper flavor profile. The price is comparable to Tullamore Dew.

This one is slightly more expensive, but because it’s aged in rum barrels, it has flavors of vanilla and molasses without much of the same character as a whiskey. The flavor is interesting with rum and floral notes. 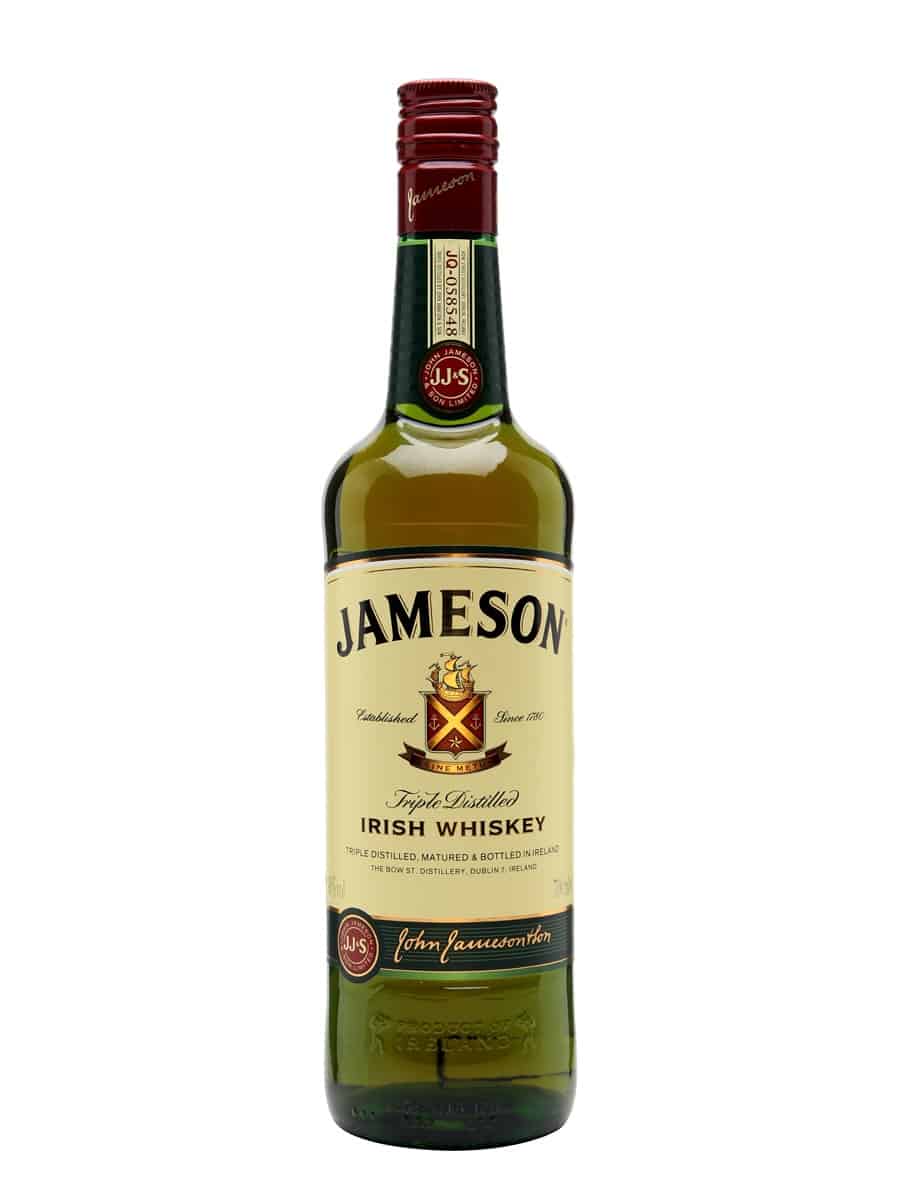 This is by far the most popular Irish whiskey in the United States. It outsells number two at 10 to 1. However, that isn’t always indicative of quality. It simply means people have heard of it, so brand recognition plays into their purchasing habits.

Jameson smells like lemon, orange peel, vanilla, and pepper. It’s clean and simple, but dominant and assertive. It’s worth it, especially at the price point. It’s affordable, and its popularity makes it widely available to just about everyone. 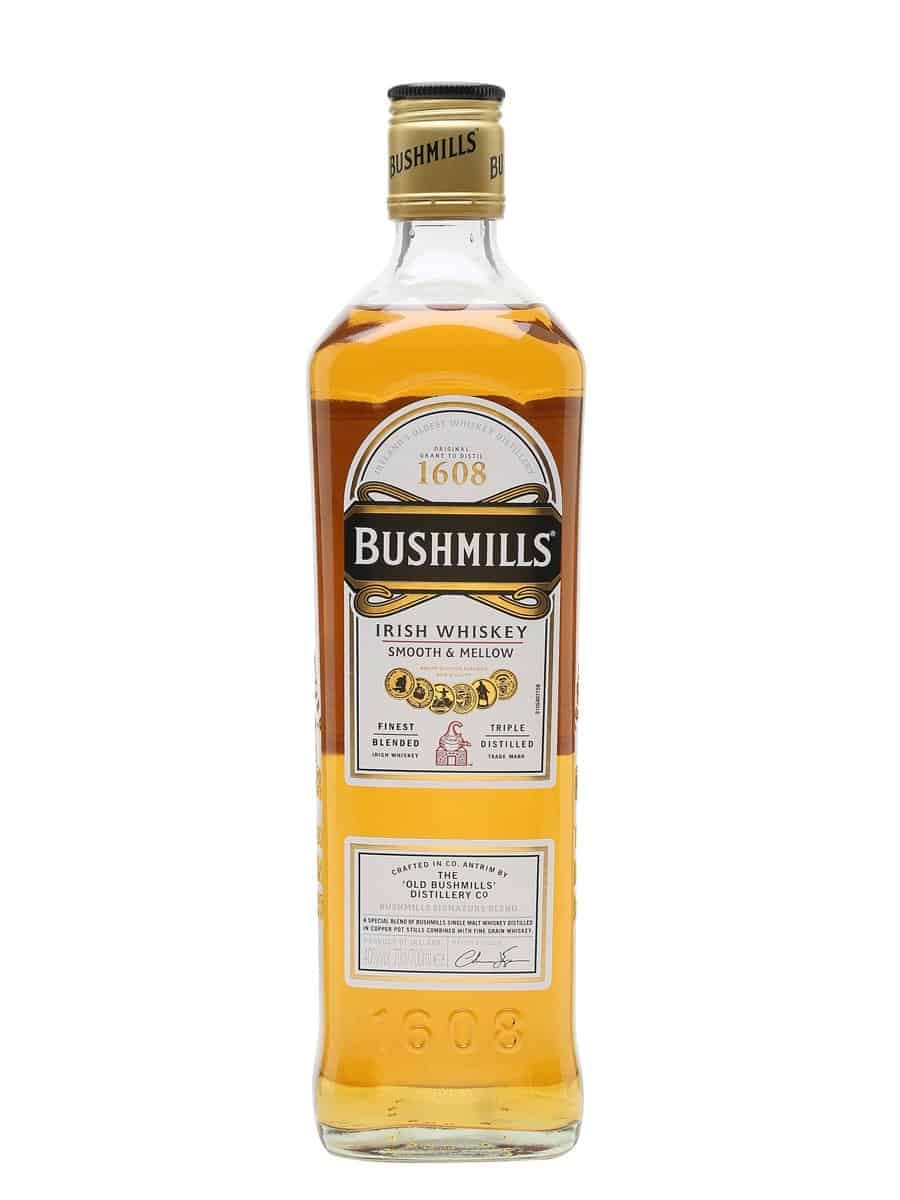 This is the number two selling Irish whiskey in the States. It tastes like a freshly baked apple pie topped with cinnamon. There’s a hint of tropical flavor that spices it up a bit and makes it interesting.

Tullamore Dew is an Irish whiskey with a rich history. Its ownership is muddied with changing hands and consolidations, but it has returned to its roots and is a great Irish whiskey to try. It is smooth and buttery, making it accessible to novices, but it has a complex flavor profile for its price.

It makes a fantastic neat sipping whiskey but it’s also delicious in fruity cocktails, making it a versatile choice for just about anyone. While it may lack fancy presentation, it certainly shouldn’t be overlooked. If you don’t enjoy the spicy, smoky flavor of other whiskies, Tullamore Dew is definitely something that may interest you. Its palatable finish makes it much easier to drink than you might expect, despite being a tad alcohol heavy.

Tullamore Dew is more than you might expect from another whiskey in its class, so the next time you decide to pick up a bottle of something new, grab Tullamore Dew. It’s easy on the eyes, nose, palate, and pocketbook.

What is the best Irish whiskey?

There are a lot of options out there when it comes to Irish whiskey, and that’s not even counting Scotch whisky, American whiskey, or Canadian whisky. However, there are quite a few Irish whiskey names that top the list, and you’ve probably heard of most of them. Jameson, Bushmills, Paddy, Powers, and Tullamore Dew are a few of the most popular. However, if you’re on the lookout for something new, you could try The Dead Rabbit, Redbreast, Teeling, or Slane.

How long does Irish whiskey have to be aged?

To be considered a true Irish whiskey, the liquid must be aged for at least three years. It usually isn’t exposed to peat smoke like Scotch whiskey, and Irish law states that it must be aged in barrels for a minimum of three years.

Tullamore Dew has a variety of reserves and aged products, including a 12-year, 14-year, 15-year, and 18-year. However, Tullamore Dew has not released an age statement on its original product. Because Irish law states that true whiskey must be aged for at least three years, it’s safe to assume that the original Tullamore Dew whiskey is aged for at least that long. At the price point, it’s hard to say, but it’s probably not aged for much longer than that, although longer aging would explain its complexity of character.

The Bushmills Red Blush Review – Is this Irish Whiskey Right for You?

Jameson vs Jack Daniels Compared – All You Need to Know

Jameson vs Bushmills – Which Irish Whiskey is Best for You?