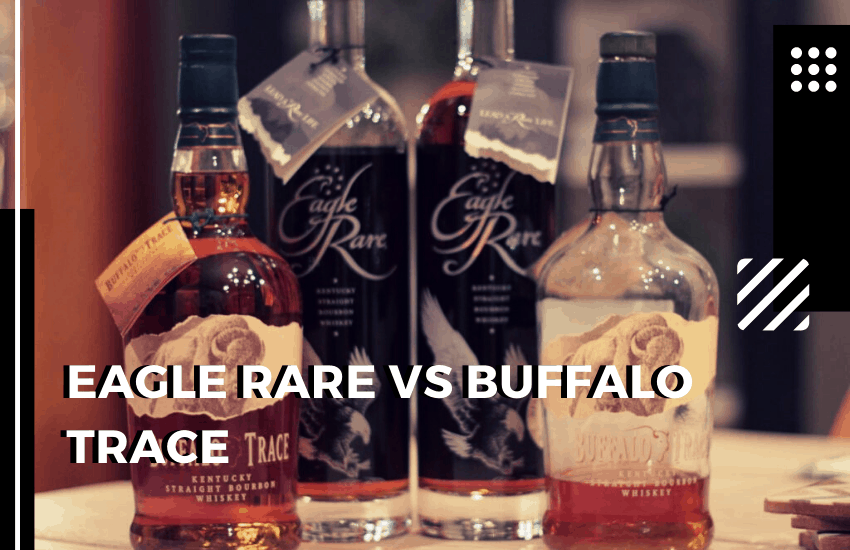 The Buffalo Trace Distillery distills and distributes both Eagle Rare and Buffalo Trace bourbon whiskey. Like many other bourbon and whiskey distilleries, it’s located in Kentucky.

Eagle Rare has been around quite a bit longer than Buffalo Trace, but they each have their place among bourbon lovers. While they come from the same recipe, their flavor profiles are slightly different.

The main differences between Eagle Rare vs Buffalo Trace are:

This bourbon whiskey is actually distilled and distributed by the same distillery as Buffalo Trace. You won’t be shocked to learn that it’s called Buffalo Trace Distillery. These sorts of creative naming conventions make them pretty easy to remember.

Eagle Rare was introduced in 1975. When Eagle Rare was originally introduced, it was a 10-year 101-proof straight bourbon whiskey, but it wasn’t a single-barrel. It has been produced and distributed by several companies over the years.

There are two varieties, aged for 10 and 17 years. They’re both 90 proof, but aging brings out unique flavors that you may like better depending on the year.

Eagle Rare’s 10-year is more popular than the 17-year, and it’s very well-loved by many. However, they have both won many awards and are both worth a try if you love bourbon whiskey. 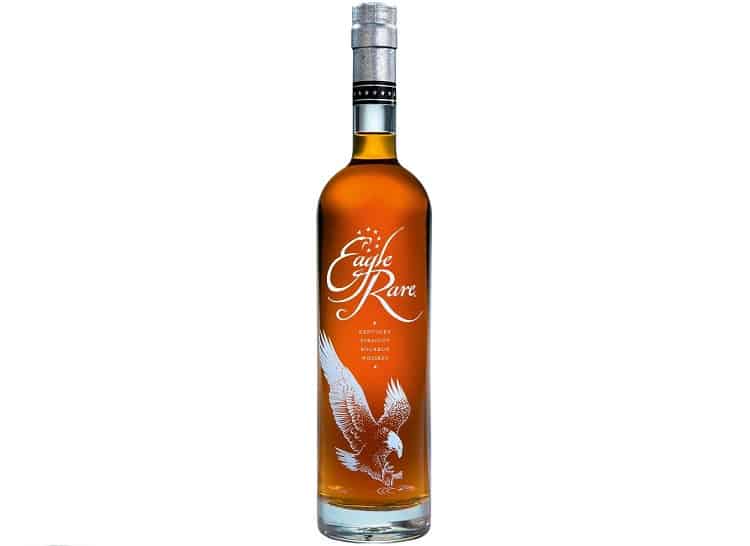 Eagle Rare is classified as a Straight Bourbon. It’s owned by the Sazerac Company and distributed by the Buffalo Trace Distillery in Frankfort, Kentucky.

This is a 90-proof bourbon whiskey aged either 10 or 17 years, although I’ll focus on the more popular 10-year variety. The mash bill is undisclosed, although it’s believed to be a low rye mash bill of less than 10%.

The single barrel statement is no longer listed on the bottle because it moves from one hand bottling line to another during bottling and could contain bourbon from two different barrels.

The release is ongoing, and the color is a lovely deep gold.

The nose is very subtle but delicious. You may notice the strong aroma of orange peels and other citruses. The aged oak scent deepens these aromas nicely. Honey-soaked marshmallow lingers a bit longer.

The nose is simple but lovely. It’s easy to identify and pick out these aromas, and you may find other interesting scents that I didn’t.

This is a really great drinking choice for people who have a hard time picking out different aromas or whose noses may not work like they used to. It’s very easy to distinguish the few aromas within.

Despite the lack of complexity, this is an enjoyable bourbon whiskey, especially for beginners. It’s easy to sip and delightfully sweet.

There’s more sweetness in the finish, just to round out your experience. It’s of medium length, and you’ll notice honey, toffee, and possibly bubble gum. You can’t expect too much of a deep finish from a shallow palate, so while the finish may not be too memorable, the overall taste is sweet and satisfying.

What sets it apart

This is one of the only mass-produced single barrels on the market, and even still, it’s not an entirely single barrel, so it may not be able to claim those rights.

However, it’s a good opportunity for many people to dive into the world of bourbon whiskey without spending a fortune. The flavor profile is sweet and subtle, although not entirely unique.

Other similar varieties include E.H. Taylor Small Batch or Four Roses Small Batch. These sweeter bourbons have lighter, less complex flavors that are enjoyable for a lot of different taste preferences. 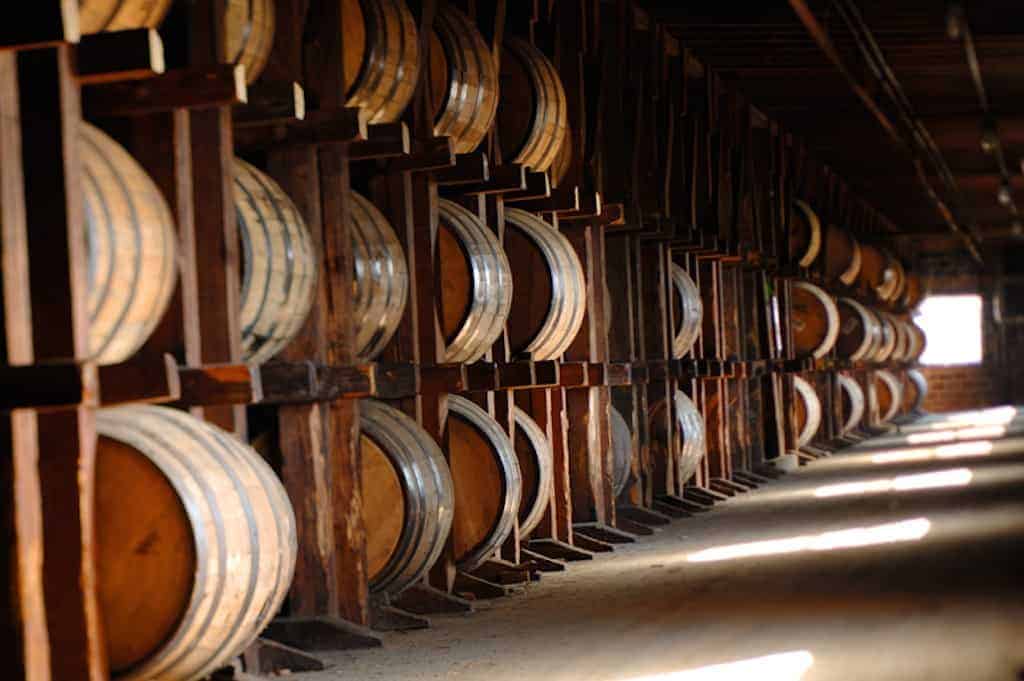 Eagle Rare is the least expensive of the range of single barrel offerings Buffalo Trace has. The problem is that its simple flavor reflects the price. It’s not bad, but you won’t find any depth of character for this price.

Don’t let the recent removal of the single barrel designation on the label deter you from trying. For this price, it’s hard not to enjoy a sweet, simple flavor.

In fact, this is a great value staple for any home bar, given that you can get it any time of the year. Other Buffalo Trace bourbon is available in limited quantities or on a limited release schedule.

How long Buffalo Trace is aged is not disclosed, but they say it’s at least eight years. My best guess is between 8 and 10 years. The mash bill is undisclosed, but much like Eagle Rare, it’s considered less than 10% rye. Its color is amber.

Buffalo Trace was first produced in 1999 after visitors came to the distillery asking why there wasn’t a bourbon named after the distillery itself. In contrast to Eagle Rare, Buffalo Trace comes from no more than 40 barrels at a time. It is aged in many warehouses and experience many temperature changes.

Buffalo Trace is a mid-range bourbon and more expensive than Eagle Rare, but not as expensive as many other varieties. 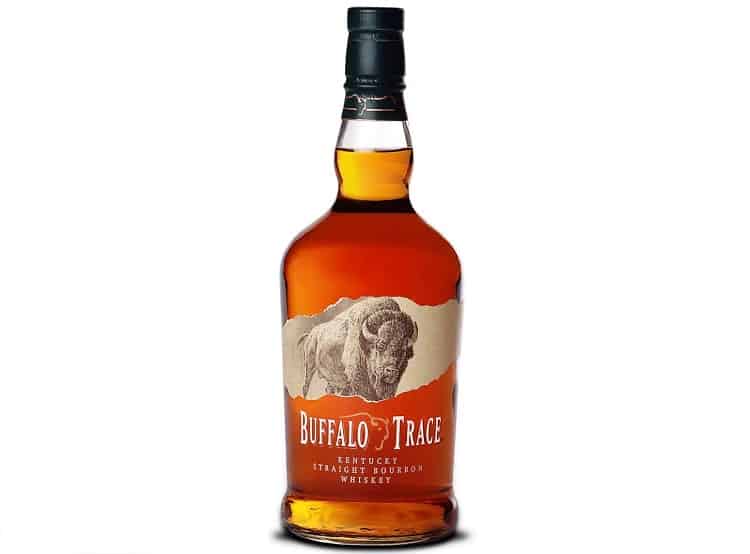 Buffalo Trace is instantly likable. It has pleasing aromas of honey, caramel, vanilla, and orange. It’s well balanced and has an underlying fragrance of mint and oak that gives it a stable foundation.

Much like Eagle Rare, Buffalo Trace has sweet flavors like toffee and brown sugar. It also tastes of vanilla, which makes it a little bit too sweet and rich for some. However, the light rye spice and oak flavors round it out nicely, making it acceptable to most who enjoy a good, sweet bourbon.

The moderate finish tastes mostly oaky but opens up to include full flavors and fills your nostrils. It’s a different experience than many other overly sweet bourbons, giving you a hint of spice, too.

What sets it apart

This isn’t a unique bourbon on the market, but it was designed with many different consumers in mind. Its price point lends itself well to affordability for most while still offering full, balanced flavor.

George T. Stagg, Eagle Rare, and E.H. Taylor Small Batch all come from the same basic recipe. Buffalo Trace is unique because it comes at a lower price without tasting cheap.

It’s a robust, 90 proof bourbon that appeals to most tastes and has a place at any home or party.

Buffalo Trace provides perhaps even more value to the bourbon market than Eagle Rare. While it’s slightly more expensive than Eagle Rare, it’s also wildly more flavorful. It makes a great mixer for a lot of cocktails because of it’s full flavor, and it’s priced right for most.

It’s also one of the best sipping bourbons at this price. You’ll get to experience all of its characteristics, whether you drink it neat, on the rocks, or mixed with a few drops of water.

Buffalo Trace is well-known, well-balanced, smooth, and drinkable. Its creators did something right when they set out to create a new bourbon from some of the best old barrels they could find.

By design, it is a great flagship brand, representative of the entire line of quality bourbons. Mass appeal doesn’t always go well with quality, but in this case, it’s a solid choice.

For the beginner, this bourbon is accessible and sweet with a great mix of oak and spice. For the seasoned drinker, it’s easy to appreciate it’s quality and value, even though it’s not the top of the line. 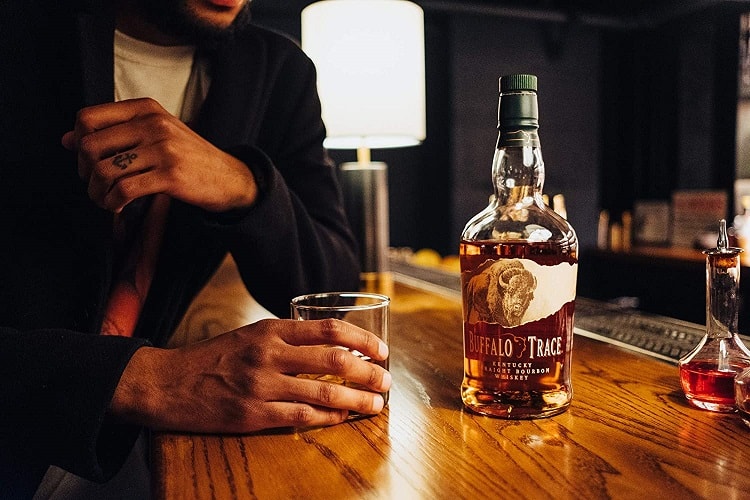 This question is always subjective. No one can tell you what you’ll like and what you don’t. Eagle Rare comes from the same basic recipe as many other Buffalo Trace products. However, it’s a pretty basic bourbon without much depth.

If you like something simple and sweet, this is an incredibly affordable bourbon that you can keep around the house all the time. It’s definitely not the most quality bourbon you can buy, but you can’t expect too much from something that doesn’t cost much at all.

Again, it’s tough to say what you’ll like better. Both of these bourbons come from the same recipe, but Eagle Rare is aged for longer. Despite being aged for longer, it has surprisingly simple flavors without much depth.

Buffalo Trace has more complex flavors and is better balanced. It comes at a slightly higher price point, and you’ll find more value here than in Eagle Rare by design. It’s a flagship product meant to reflect the brand as a whole.

Luckily, Buffalo Trace is still an affordable bourbon that many will enjoy.

Eagle Rare is aged for either 10 years or 17 years. It’s not all a 10-year bourbon. However, both are made at the Buffalo Trace Distillery in Frankfort, Kentucky, and both are 90 proof.

How long is Buffalo Trace aged?

Buffalo Trace does not have an aging statement on the bottle. However, Buffalo Trace says they age for at least 8 years. A good guess is somewhere between 8 and 10 years. A normal batch of Buffalo Trace comes from an average of 25 to 30 barrels. Sometimes it’s as many as 40.

Is Buffalo Trace good with Coke?

Buffalo Trace has deep flavor and rich characteristics that shine through no matter what you mix it with. However, when mixing with Coke, it produces a sweet, spicy, fizzy drink you’ll love.

Many people drink bourbon and Coke, and Buffalo Trace will always be one of the top choices. It mixes well without overpowering the Coke.

Eagle Rare and Buffalo Trace are both distilled and distributed by Buffalo Trace Distillery in Frankfort, Kentucky. They both come from the same recipe, and both are aged for at least 8 years.

However, Buffalo Trace has more depth of character and rich flavor than Eagle Rare, despite being, well, less rare. Both bourbons appeal to a wide variety of people, but Eagle Rare is a simple, sweet variety that is good for beginners.

Buffalo Trace is the better value of the two because it was specifically designed for quality. It costs a bit more than Eagle Rare, which is very cheap, but it’s well worth the price tag for a great bourbon that has a place in any home.