What does “The Macallan” conjure up for you? Mahogany fireplaces in cozy libraries? Businessmen discussing million dollar trades over cigars? A fancy dinner out you’ll regret later? The Macallan has certainly become the ubiquitous luxury scotch. Even relative newcomers to the world of whisky seem to know that Macallan screams quality. And there are good reasons for it too.

Main Differences Between Macallan 12 vs 18

The main differences between Macallan 12 vs 18 are:

A Brief Background on Scotch 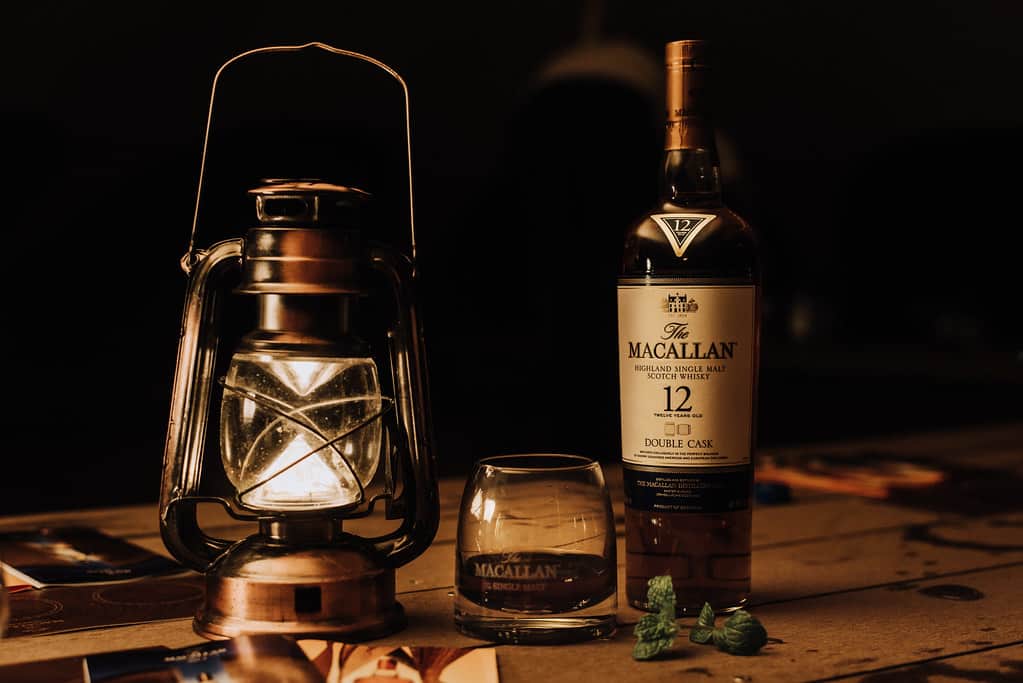 The story of Scotch whisky first began centuries ago around the 1400s with a Scottish drink called “beatha” or “water of life.” The drink morphed over the centuries. And beginning in 1988, specific regulations were put in place to determine the legal definition of “scotch.” These rules were then expanded in 2009, making scotch one of the most highly regulated drinks in the world. To be considered “Scotch” the dram must:

While its popularity rose consistently over the centuries, scotch distillation was actually illegal for years. And much of scotch distilling history is full of illicit production and swashbuckling tax evasion. But in 1823, Scotch was legalized and distilleries cropped up all over Scotland.

What is a Speyside Scotch? 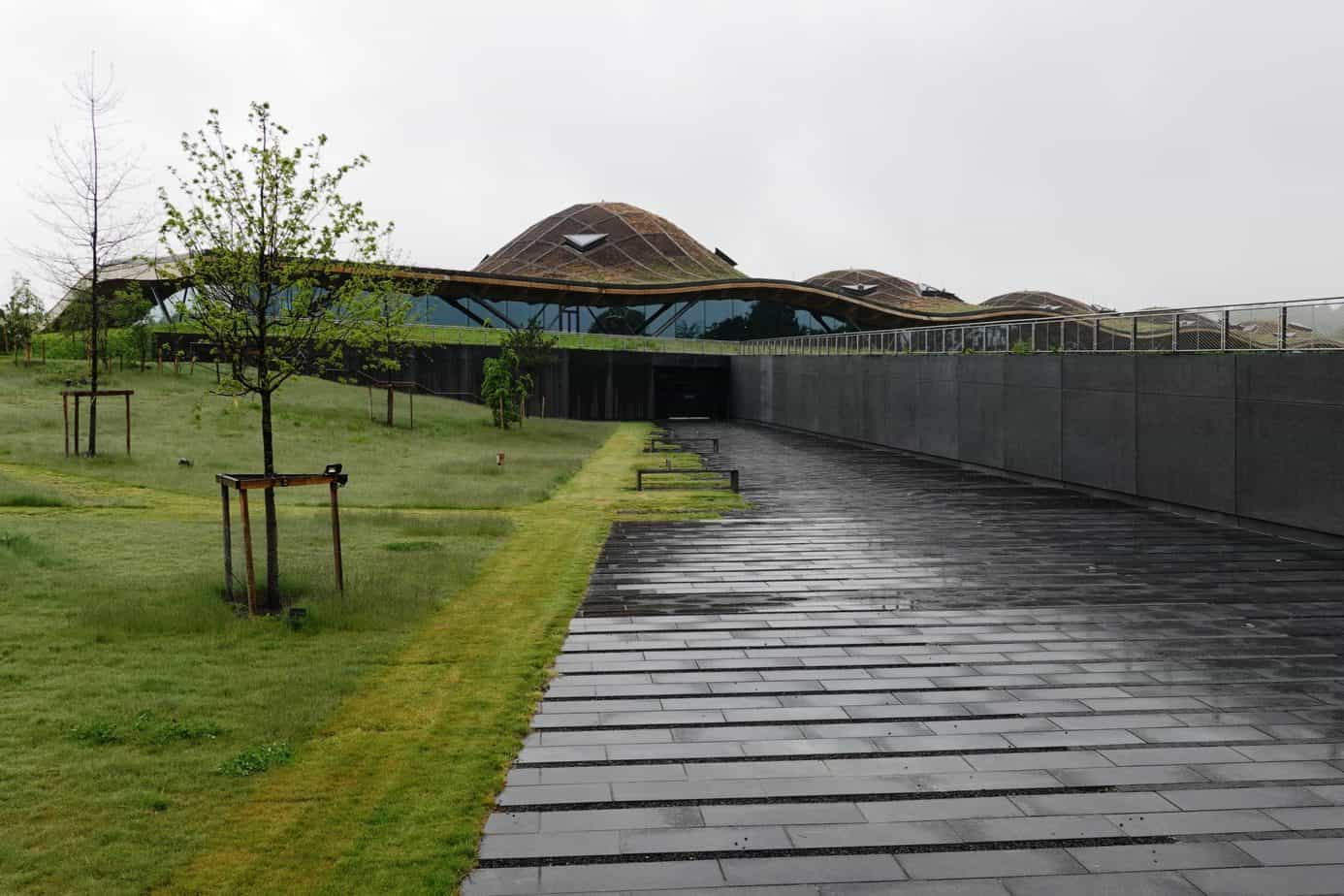 Each region of Scotland creates their own unique version of scotch based on the type of barley they use, their climate, their water sources, and their production and maturation methods.

The main regions of Scotch production are:

The Macallan Distillery is technically located in Speyside and the brand bills itself as Speyside. However, their bottles are often labeled as “Highland Single Malt.” This is why some consumers get confused. Speyside is actually a subregion of The Highlands, which is why the label is allowed. So what is the difference?

The Speyside region produces around two-thirds of all Scotch Whisky. A typical Speyside is light and grassy with strong fresh fruit and vanilla flavors and just a hint of smoke. But Macallan stands apart.

The Macallan is a darker, spicier twist on the classic Speyside. Still full of fruit and smoke, its production adds a darker, richer, spicier note.

What makes The Macallan different? 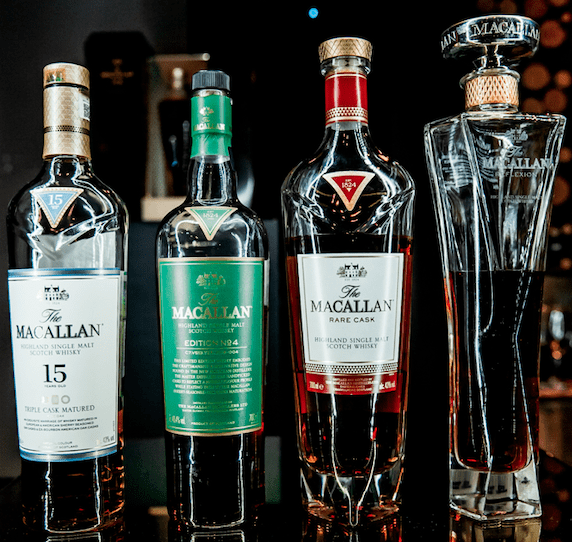 With a reputation like The Macallan, there has to be more than just a unique set of flavors that set it apart. Careful and subtle differences in production stretch all the way back into its early history and create a truly remarkable scotch.

The Macallan Distillery was opened in 1824 by barley-farmer Alexander Reid. In 1892, Roderick Kemp took over the distillery and proved to be the defining contributor to Macallan’s success. He imported Spanish oak for casks and implemented a marketing scheme that rocketed Macallan into the public’s eye.

That reputation lasts even today where a bottle of The Macallan 1926 sold for over a million dollars.

Because of the tight regulations listed above, scotch production follows the same pattern at every distillery. However, each distiller makes slight changes and adjustments in the process and technique to create their own unique Scotch. So what changes does The Macallan make to create such a benchmark dram? Let’s look at each of the processes and find out.

Malting is the process of preparing the barley for distillation. In order to develop stronger flavors, the barley is germinated, then dried overheat and combined with water to create “wort” and allow early conversion of sugars into alcohol.

The Macallan uses a specific type of barley called Minstrel that is exclusive to their distillery. There are 95 acres of this barley grown on the distillery estate itself. And several local farmers also contract with the distillery to grow their unique barley.

Fermenting is the process of converting sugars in the barley into alcohol. While barley has natural enzymes that begin the process in step 1, yeast is added in the fermentation step to increase the speed and quantity of the alcohol produced. This new mixture is called “wash.”

Distillation is a two-step process that purifies the alcohol into something we can drink. The “wash” is basically a mixture of yeast, barley, water, sugar, and alcohol. The first distillation called in copper pot stills, separates all the liquid alcohol from this mixture by adjusting heating and cooling levels in the pot.

The product of the copper pot still is a low alcohol, impure “low-wine,” which proceeds to part two of the distillation.

Part two of the distillation occurs in a spirit still, which further purifies and raises the alcohol level of the soon-to-be-scotch. The alcohol purifies in sections, cut by the distiller. The first portion of the alcohol to evaporate, the “head,” is typically too impure to be used. The final portion, the “tail,” lacks flavor. The middle portion, the “heart,” is what goes on to maturation. Where the head, heart, and tail are cut during the process is up to the master distiller. 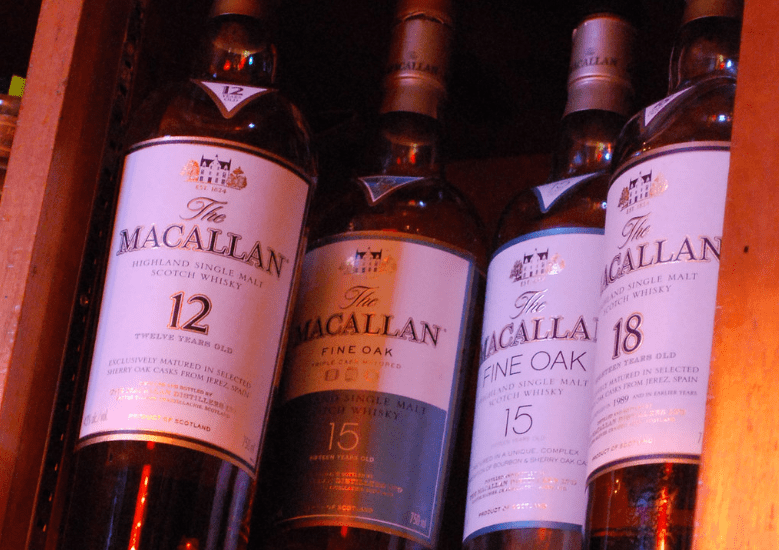 The Macallan uses much smaller stills than the average size at most distilleries. While at first this might seem limiting, it actually produces much more concentrated low-wine. The smaller batches are easier to control, so the master distiller has a much easier time being precise in their measurements and cuts. Smaller batches also means greater interaction with the copper of the pot stills, which adds greater flavor.

Maturation is the process of aging the scotch in oak barrels. This is where most of the flavor and color develops. The “heart” of the distillate is poured into massive oak barrels and left to age at low temperatures for at least 3 years, often much longer.

The real beauty of The Macallan shines through in their expert maturation techniques. And it might be what the distillery is best known for!

In 1892, Kemp imported Spanish oak to make specialty barrels onsite. And it’s these specifically seasoned barrels that give Macallan so much deliciously unique flavor. Even today the Spanish oak is handpicked and imported to the distillery. There they cut, shape, and fire the barrels. Most casks are seasoned with spicy sherry which imparts all that spice and fruit into the maturing scotch. But a few barrels are seasoned differently or not seasoned at all to really focus on the flavor of the oak wood.

The Macallan has their own cooperage on site for the creation and maintenance of their barrels. And they are the only distillery to employ a Master of Wood at all times.

The Macallan also does not use any caramel coloring in their scotch. All color in the bottle comes exclusively from aging in their specialty oak barrels! 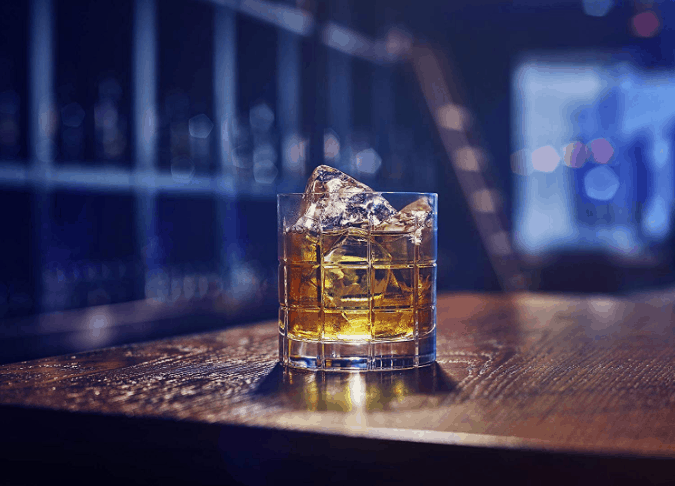 Now for the part, you’ve been waiting for! What really is the difference between the classic Macallan 12 and the pricey Macallan 18.

Long Oaky Finish with hints of Salted Caramel and Vanilla 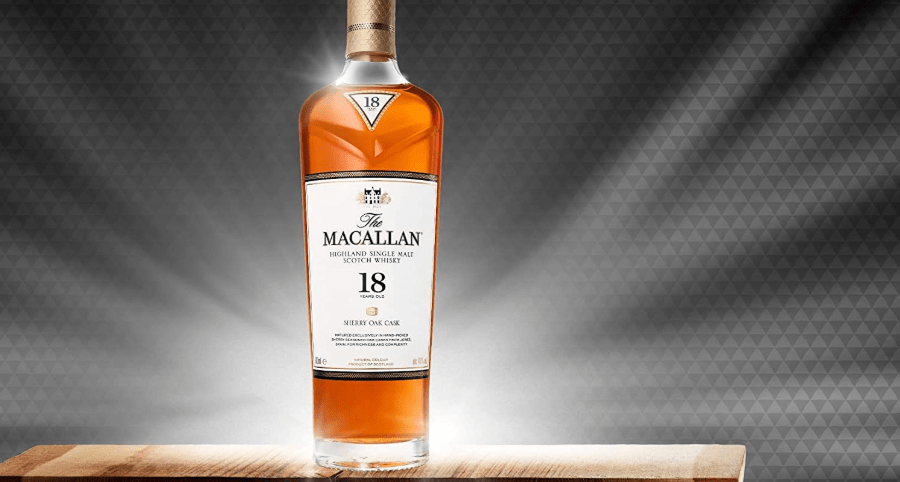 Smooth, So Smooth, No Alcohol Burn (Is this even alcoholic?). Strong Oak and Leather, Hints of Plums, Raspberries, and Cherries, Bit of Milk Chocolate, Orange Studded with Cloves

Long and Leathery, Hints of Tobacco, Dried Apricots and Ginger, Oak is the final note.

Of course, there are many more options than just the 12 and 18 year. And there are more complex flavor options as well.

The Macallan makes ages ranging from 12, 15 and 18 to 30, 40, and 45-year bottles. And their lineup includes some specialty ranges like Gold, Rare Cask, and several collections like the Quest Collection and the Master Decanter Collection.

If you’re looking for more than the basic Sherry Oak, try selections from their Double Oak or Triple Oak Varieties. You can learn more about the differences in these maturation options in our Macallan 12 Year Review where I taste test Macallan 12 across all three!

However, the Macallan 18 is considerably more expensive. It ranges around $260 in most of New York City, and I’ve found it upwards of $280 in some stores. Those 6 extra years in the barrel really up the price tag!

What is Single Malt Scotch?

Single Malt Scotch is a further designation under the “scotch” category. All the above rules for scotch apply. But the “single malt” specifies the type.

Single, in this case, refers to a single distillery. It does not refer to a single barrel or bottle. Distilleries blend multiple barrels together to create a bottle.

Malt, in this case, refers to malted barley as the only base grain.

So a “single malt scotch” simply means a whisky:
– Made entirely in Scotland
– Made only of malted barley and water
– Aged at least 3 years
– Includes scotch from only one distillery

What do the Ages mean on bottles of Scotch?

This distinction is a method of quality control and means you know exactly what you’re getting any time you buy a bottle.

Why is The Macallan so expensive?

Obviously the reputation as a “luxury” scotch has something to do with it. If you create a well-known premium product, you can charge more. People are partially paying for the brand. But in the case of The Macallan, it’s justified. The Master Distiller and Master of Wood use incredibly remarkable skill to create the complex flavors you find in Macallan. (Just think how much importing all that Spanish oak must cost them!) The reputation is well deserved!

How do I serve The Macallan?

Like most scotch, The Macallan can be served neat (room temperature, plain) or on the rocks (with ice).

As a personal favor to me and your bank account, don’t use more than one or two ice cubes at a time. You’ll dilute the flavor so much the taste won’t be worth it!

Why is it called “The” Macallan?

Adding “The” to the title of single malt scotch is a marketing ploy first used by The Glenlivet to avoid other distilleries ripping off their name. It’s now become common for some of the most popular distilleries, including The Macallan.

So, which is your choice? In all likelihood, it will come down to price. The Macallan 12 is a remarkable bottle (whether Sherry Oaked, Double Oaked, or Triple Oaked). It’s full of subtle complexity and rich sweet flavor offset by a perfect level of spice.

The Macallan 18 is distinctly smoother, richer, and full of even more unique leathery flavors. But the price may be a sticking point. It certainly is for me. Back when it was only $150, I could imagine investing in a bottle for special occasions. But now that it’s gone up to over $200…I’d rather get my Macallan fix with the 12 year!

If you’re looking for a good bottle of luxury scotch without taking out a loan, don’t be above the Macallan 12! And if you feel like making an investment, the 18 will definitely impress.

Kathryn Loveless is a freelance writer for hire who delights in all things delectable. You can find her perfecting a roast chicken recipe, hunting down a new bottle of scotch, or hosting a wine and cheese soirée somewhere in New York. My passion for Scotch started in college when my conniving parents gave me their best whisky for my "first taste." Needless to say, the stuff my friends had at school didn't compare. They had a joke "If Kathryn comes to a party, you need a whiskey that's over $40." My first job in NYC was hosting several fine-dining establishments where I learned everything I could from bartenders and mixologists. Now that I work in writing and development full-time, I continue my education in classes around the city and explore the newest whiskeys on the market. (Still trying to find a bottle of Compass Box No Name if you have any leads...) Newest in my collection: Compass Box Peat Monster and Port Charlotte Islay Single Malt (I love peat if you can't tell.) Most interesting thing on the market right now: Japanese whisky! (No "e" since much of the trade was learned in Scotland.)

Glenlivet 12 vs Glenmorangie 10: Which Will You Love More?